The Daily Northwestern • May 22, 2013 • https://dailynorthwestern.com/2013/05/22/campus/son-of-construction-worker-killed-on-campus-sues-general-contractor-for-northwestern-building/ 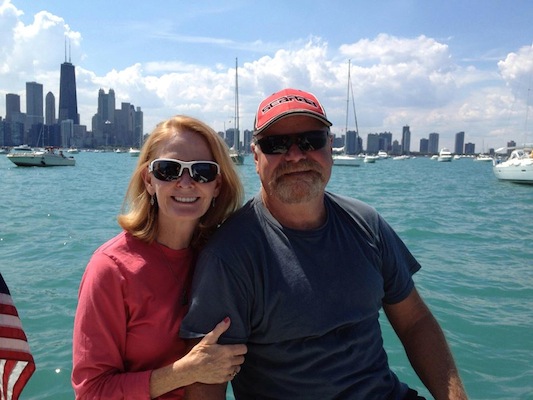 Michael Kerr and his sister Jacquelyn Rowles pose for a photo at the Chicago Air and Water Show last year.

The 21-year-old son of a construction worker killed last week by a falling beam is suing the general contractor for Northwestern’s new Music and Communication Building.

Michael Kerr, 57, was hit in the head and chest by the 16-foot, 70-pound beam after a crane knocked it off the sixth floor shortly after 7 a.m. May 16, officials said. Kerr, who was on the ground floor, was taken to Evanston Hospital and pronounced dead at 8:55 a.m.

Kerr, of the 2400 block of Hart Street in Dyer, Ind., died from multiple injuries, according to the Cook County medical examiner’s office. His death was ruled an accident.

Michael Kerr, the construction worker’s son by the same name, filed a wrongful death lawsuit Monday in Cook County Circuit Court against Power Construction Company of Schaumburg. The four-count suit alleges Power Construction is responsible for Kerr’s death and did not do enough to prevent it, including properly securing construction materials and inspecting the work environment.

NU is not named in the lawsuit, which asks for the jurisdictional minimum of $50,000 per count in damages and legal costs. In Cook County, a specific dollar amount is not determined until later in the legal process in such cases.

Louis Cairo, the younger Kerr’s attorney, said his client’s family is “absolutely distraught” over the loss of the father.

“This is his best friend,” Cairo said of the younger Kerr. “He had breakfast with him in the morning and was identifying a body in the afternoon.”

Cairo described the elder Kerr as a motorcycle enthusiast who woke up early everyday to commute more than an hour to work. Kerr is also survived by a daughter in her 20s, Cairo said.

In an interview with The Daily on Wednesday, University President Morton Schapiro said he often checks a live webcam of the construction site before leaving everyday and never imagined someone could lose his life there.

“I look at that building rising and the frame coming up and everything, and it never occurred to me that there would be a tragic accident like that,” Schapiro told The Daily.

In his about 15 years at NU, University spokesman Al Cubbage said he cannot recall another construction worker dying on campus.

“It was a very sad situation,” Cubbage told The Daily. “The man was a father and a grandfather and a very seasoned construction worker. Just a really tragic accident.”

The Occupational Safety and Health Administration is investigating the fatal accident and could take up to six months to reach a conclusion. Cubbage said he did not know whether the University would take a closer look at its business with Power Construction if the company were punished in the wake of the OSHA probe.

Jeff Karp, president of Power Construction, did not return several requests for comment on the lawsuit Tuesday and Wednesday.

Workers were sent home after the fatal accident Thursday, but it remained unclear as of Wednesday whether construction had resumed. Karp said Friday he expected work to start again Monday, but he did not reply to a request for confirmation when the day came.