ASG approves more than $1 million in funding for student groups 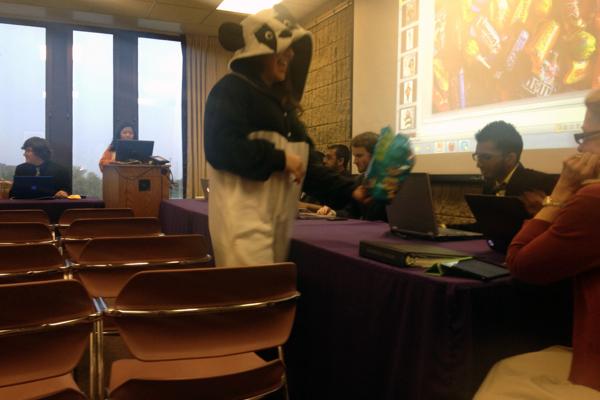 Members of the Northwestern Community Development Corps in costume pass out candy during Wednesday's Senate meeting. The candy was part of the organization's request for more funding for their Halloween event, Project Pumpkin.

A&O Productions was given almost $400,000,  the most money an A-status group received from ASG this spring. Senators voted to approve $1,400 more for the group’s Blowout concert in the fall and $1,200 more for its Spring Benefit show than the Student Activities Finance Committee recommended.

Senate added $50 to College Republicans’ funding for Freedom Week, which runs Nov. 5-9 and celebrates the fall of the Berlin Wall. The week will include speakers, the tearing down of a fake Berlin Wall, painting of The Rock and the distribution of miniature American flags, pocket Constitutions and temporary tattoos. Most of the week’s funding will come from outside sources.

“We hope to make it a big deal,” said Rebecca Schieber, College Republicans president and a Weinberg sophomore. “We hope to do this every year.”

Senators voted in favor of funding the week despite the objection of SAFC, which initially did not give money to Freedom Week because its guidelines forbid the funding of new events.

Senate voted down College Feminists’ requests for additional funding for their performance of “The Vagina Monologues,” their speaker budget and Take Back the Night. Senators initially passed the group’s request for $2,643 for its performance but cut the amount by $2,500 following opposition from SAFC. The group gained only a net $143 more than the SAFC recommendation for “The Vagina Monologues.”

“If you keep on passing these increases, it’s going to be hurting the organizations that are doing well,” said Siddiq Ather, ASG financial vice president and a Weinberg junior. “Respect the recommendations that we give out because we understand that other organizations need increases (in funding) as well.”

The Northwestern Community Development Corps successfully secured $1,750 for candy for Project Pumpkin, a philanthropic Halloween event for children held in Norris University Center. As part of the presentation in favor of the amendment, NCDC members dressed in animal costumes passed out candy to attendees.

Senate also passed an election reform bill. Ian Coley, the off-campus caucus whip who co-wrote the bill, said he was pleased the bill passed, especially the provision shortening the length of the campaign season.

“People on campus will really appreciate that,” the Weinberg senior said.