The Daily Northwestern • May 21, 2013 • https://dailynorthwestern.com/2013/05/21/sports/lacrosse-senior-attack-wears-emotion-on-her-sleeve-as-northwesterns-offensive-leader/ 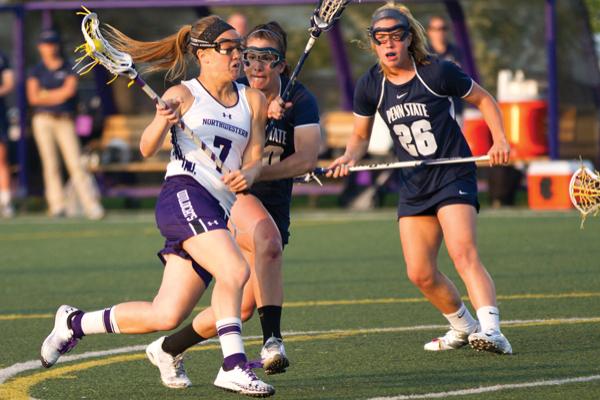 Senior attack Erin Fitzgerald leads Northwestern in goals with 59 so far this season. Fitzgerald, who upon graduation will move back to New York to start working, said she will miss her quirky teammates and playing on Lakeside Field.

She charges on the field, more determined than running. Anywhere near a cage, she will rocket — not shoot, but something more aggressive, more determined — the ball past an opposing goalie.

Then there is the rare occasion when she is not looking to score.

In that case, the senior will charge past defenders half of a foot taller than her 5-foot-4 compact frame (her mother was a gymnast at Iowa, her father a wrestler there) and pull away at the last second to protect a Northwestern possession.

Lucky for those defenders, because a Fitzgerald looking to shoot is almost always bad news for the opposing team.

“She’s not afraid to take chances,” senior midfielder Ali Cassera said. “She’s one of those people that you don’t want to play defense against.”

Fitzgerald has scored at least 3 goals in 12 out of the team’s 21 games this season, two of which were 4-goal games and four of which were 5-goal games for the senior. She tallied 6 goals against Harvard on March 16.

This season, the senior has not scored in only two of the Wildcats’ games — NU’s ALC Championship win against Florida and its second-round NCAA Tournament win against Stanford.

In fact, those two games were Fitzgerald’s only scoreless contests in her last 24 games, dating back to last season.

Coach Kelly Amonte Hiller, who said Fitzgerald’s freshman-year shot is incomparable to Fitzgerald’s polished technique this year, said after the second-round NCAA matchup that when Fitzgerald is not scoring, she still helps the team by drawing defenders away and opening scoring opportunities for her teammates.

Fitzgerald also realizes the benefits of not scoring once in a while.

“It’s kind of exciting to see so many girls step up and be a scoring threat when your biggest scorer is not. … It’s just been really fun to know that your teammates have your back, and you can focus on the little things,” Fitzgerald said. “I think sometimes you have to know that that’s going to be the decision that makes the team more successful in that game. … Sometimes it’s the smart plays that are better than the home run plays.”

Fitzgerald — who is known to celebrate her goals by saluting and taking a dramatic bow, among other rituals that she said she comes up with on the spot — netted a hat trick against Penn State in the Cats’ quarterfinal matchup with the Nittany Lions.

Both what Cassera calls Fitzgerald’s “little attitude” and her gutsy, tenacious style of play correlate with Amonte Hiller’s description of the attacker.

“I think she puts everything into it,” Amonte Hiller said. “There are certain players where they’re just like steady, and you don’t really see them change from play to play, but I think Erin puts it all out there. … She really wears it on her sleeve and gives it everything she has.”

The newfound spirit could be a result of the loss of Fitzgerald’s good friend and mentor, last season’s leading scorer Shannon Smith, with whom Fitzgerald used to jump into a mid-air hip-bump after goals.

Fitzgerald said she did not feel pressure to lead the team offensively since Smith graduated, so she just fell into the role. And while following Smith’s footsteps to become the Cats’ offensive leader in 2013, Fitzgerald managed to rack up a few honors along the way.

This season, Fitzgerald became the 13th player in program history to reach 200 career points along the way and was named to the first-team All-ALC team and an IWLCA All-West/Midwest Region honoree.

Next up for Fitzgerald and her teammates is a semifinal matchup with North Carolina, and though Friday’s game is what the Cats are focused on right now, Fitzgerald has her post-graduation plans set.

The Long Island native said she is moving back to New York next to start a job she has been working on for some time but will be back to visit Evanston periodically.

In fact, Fitzgerald said she could not stay away if she tried.

“I think Northwestern lacrosse will always be a part of me,” she said. “I’ll always have that connection back to Lakeside Field and back to this coaching staff. They’ve really transformed me into the person I’ve become. … I’ll forever be grateful for that, and I’ll always take it with me.”