The Daily Northwestern • May 20, 2013 • https://dailynorthwestern.com/2013/05/20/sports/lacrosse-ali-cassera-switches-sports-to-fulfill-high-school-dreams/ 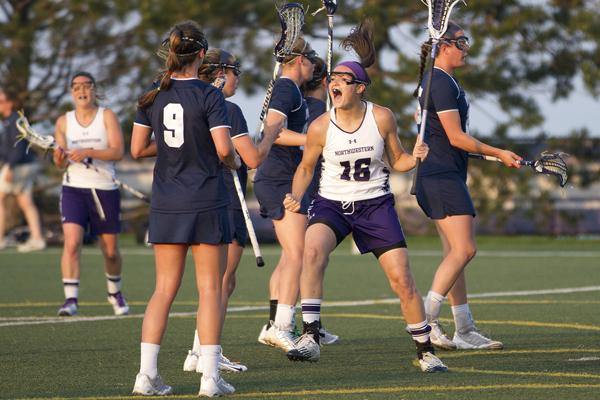 Northwestern midfielder Ali Cassera is trading in her lacrosse stick for a basketball next academic year. The senior will use her fifth year of eligibility to play basketball at Division III Montclair State next fall.

Here at Northwestern, senior midfielder Ali Cassera is one of seven seniors who will lead the Wildcats into their Final Four matchup against North Carolina on Friday.

Back home in Fairfield, N.J., she has a reputation.

“I started just checking her background and everyone in this area knew who she was,” Harvey said. “They were like, ‘Oh, that’s that phenomenal lacrosse player from West Essex (Regional School District).'”

The senior, a contributor across the field on coach Kelly Amonte Hiller’s national championship-defending squad, had just contacted Harvey about spending her fifth year of NCAA eligibility playing basketball at Montclair State.

“I was a big time basketball player in high school,” Cassera said. “When I thought I was going to go for my masters, I thought, ‘I’ve heard some people do four years of one sport and then they’ve done the fifth in another, so why not?’ … It just kind of took off.”

Cassera was a four-year letter winner in basketball, field hockey and lacrosse at West Essex and played AAU basketball throughout high school.

The senior said she had always wanted to play basketball in college and contacted Harvey after she was accepted into Montclair State’s graduate school to earn her master’s degree in school counseling.

From there, Harvey, a previous high school and college lacrosse coach who is now in her sixth season as the head basketball coach at Montclair State, started working the coaching grapevine.

“Everything I’ve heard about her has been super positive and my interactions with her have been great,” Harvey said. “Anytime you can bring somebody in with her level of experience, playing Division I lacrosse, winning two national championships, trying to win a third, that’s great experience.”

Harvey said she is excited to add Cassera’s leadership and athletic prowess to the program. This past season, Montclair State ended the year ranked first in the Atlantic Conference and made it to the third round of the NCAA Tournament.

“Our style of play is just if you’re a good athlete you can do well in our system,” Harvey said. “When I talked to Ali, she was like, ‘I don’t care if I ever play. If I can make someone better, if I can make the team better, I’ve just always wanted to play college basketball.'”

But before Cassera starts working on her longtime dream, she has a legacy to finish out at NU.

In her career at NU, Cassera has sat out a total of two games over four years. This season, Cassera became a team staple, started in all but two contests and has racked up 24 goals so far, which puts her in fourth place — tied with senior Amanda Macaluso – for most goals scored this season.

In addition to fulfilling her dream of playing college ball, Cassera is happy that she will not be throwing what she learned about lacrosse from Amonte Hiller out the window, as the two sports share so much in common.

The senior lists cutting, quick feet, defensive positioning, one-on-one defense and game awareness as just a few elements lacrosse and basketball have in common – things that she has improved in her lacrosse game over the past four years that will make her a better basketball player.

And the fact that the senior has not actually played basketball in quite a while? Cassera isn’t too concerned.

Correction: A previous version of this story misstated Ali Cassera’s role. She is not a captain this season. The Daily regrets the error.