The Daily Northwestern • May 19, 2013 • https://dailynorthwestern.com/2013/05/19/city/amid-relocation-buzz-evanston-art-center-holds-biggest-fundraiser-of-year/ 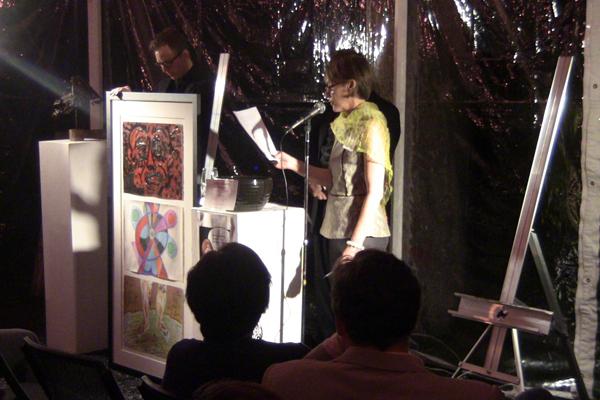 More than 100 artists donated works to be auctioned off at the benefit, where residents and artists sampled hors d’oeuvres and a wide range of works including ceramics, paintings and sculptures. The center held a silent auction and a live auction.

“Sometimes two couples bid against each other, and it’s a bit of a show,” Diedrich said. “The live auction is kind of the theatrical portion of the night.”

Only a handful of pieces was presented during the live auction, which featured rare works of art, Diedrich said.

At the beginning of the live auction, residents appeared hesitant to bid even as the auctioneer urged them not to miss out on the opportunity to purchase undervalued pieces. However, the abstract art piece “Exquisite Corpse #1,” marked “priceless” for retail value, sparked rivalries among residents, who drove its price tag to close to $2,000.

The money brought in from the auction and grants, such as $20,000 from the John and Frances Beck Foundation, will help pay the center’s $1.2 million operating budget, Diedrich said. Although the center pays negligible rent for the property as a nonprofit organization, maintenance costs make up a large part of the budget.

“(People) don’t realize we have to do maintenance and upkeep,” Diedrich said.

With talks of selling the Harley Clarke Mansion to local billionaire James N. Pritzker, who plans to remodel the city-owned building into a boutique hotel, the art center has been exploring options to relocate, Diedrich said.

“I think they’re going to survive,” Sousa said. “It’s just going to be a matter of finding the right home.”

Communication sophomore Breanna Lucas, who interns at the center, said she hopes the center will find another home to carry on its art programs.

“It’s definitely a beautiful building and hopefully they do find another place just as beautiful to showcase the art here,” Lucas said.