The Daily Northwestern • May 16, 2013 • https://dailynorthwestern.com/2013/05/16/sports/womens-tennis-northwestern-wildcats-take-on-hurricanes-in-ncaa-tournament-sweet-16-round/ 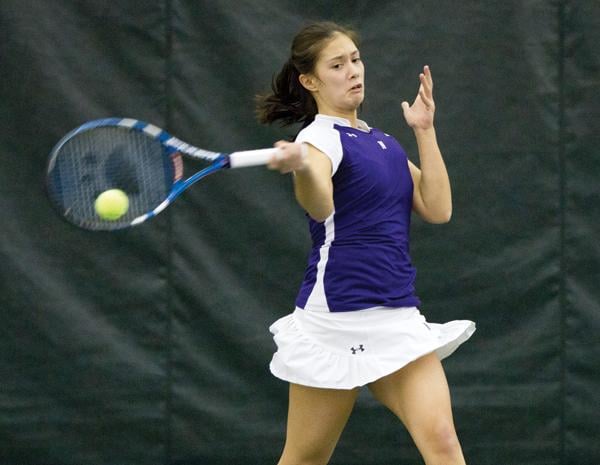 Northwestern junior Nida Hamilton made quick work of both of her singles opponents in the first two rounds of the NCAA Tournament. However, it will be her performance on the doubles court with partner, senior Linda Abu Mushrefova, which will be crucial for the Wildcats success in the round of 16 and beyond.

Northwestern will face off against the University of Miami late Friday afternoon in the NCAA Tournament.

“I just hope that we compete at the level we’ve been at,” coach Claire Pollard said. “I hope that we stand really strong. They’re really tough. I hope we present a really strong, fighting image against (Miami).”

Miami had to defeat North Florida and Purdue to reach NU in the tournament. The Hurricanes are currently ranked No. 6 while the Wildcats are ranked No. 11 in NCAA rankings.

The two previously faced off in February, when NU won 4-2 in Charlottesville, Va.

“I think it’s like a whole different season,” Pollard said. “I don’t even remember February. It seems like a different lifetime ago. Once you get to the NCAA everyone is 0-0.”

Three months later, both teams have gained more experience and improved. Last time the teams played, the Hurricanes were ranked No. 10 and the Wildcats were No. 14 in the nation. Both teams have moved up a few spots in the rankings — Miami has gone 16-2 since March 3 while NU beat many ranked opponents such as Michigan, Nebraska and Indiana.

“I think it’ll be a really different match,” senior Kate Turvy said. “Both of our teams have evolved over the season. I’m excited, I know it’ll be competitive and a great match.”

This time, the match will be played outside if the weather cooperates. Lately, NU has gotten a lot of playing time outside because of the nice weather in Evanston. Last time the two faced off, Pollard said, the match in Charlottesville was inside — at the time, an advantage for the Cats.

“Now they’ve got us outdoors, which may be their advantage,” Pollard said. “I think it’s going to be a great match and really fiercely contested.”

The Cats rely on the doubles point whenever they play, which gives them a bit of a cushion going into the singles play. Linda Abu Mushrefova and Nida Hamilton are ranked No. 14 nationally in doubles play. Miami doubles, although not ranked at the time, took down No. 27 Krisztina Kapitany and Mara Schmidt from Purdue last weekend.

“We played (Miami) earlier this year; we know what they’re all about,” senior Linda Abu Mushrefova said. “I think we have a good doubles point there. They’re obviously good too, but we’ve been working on it quite a bit. We’re looking to get that doubles point from them to get an advantage.”

This is also the first time in NCAA Tournament history that Illinois is hosting. Because the host school is closer to home than previous years, the Cats were able to practice a bit longer and leave a little later from their home courts.

“It’s also a great perk that we could get some fans down there,” Mushrefova said. “I think that’ll be nice. It’ll almost be like having a home court advantage.”

The Cats and Hurricanes go head to head Friday. Every match left in the tournament includes a nationally ranked team.

“I hope we play some tough, tenacious tennis,” Pollard said.