The Daily Northwestern • May 15, 2013 • https://dailynorthwestern.com/2013/05/15/city/evanston-public-art-committee-recommends-tavern-mural-for-farmhouse/ 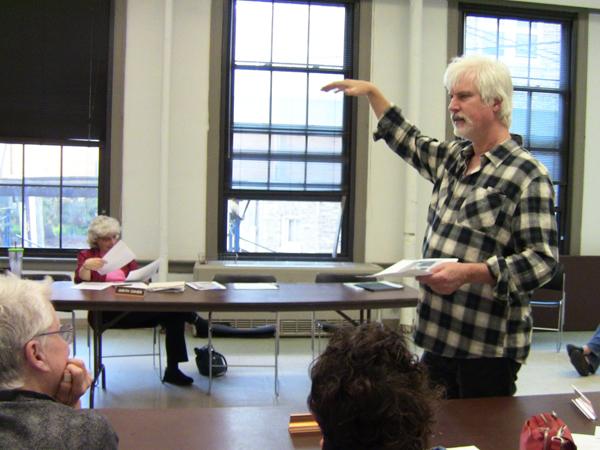 Artist Peter Hurley discusses plans for a mosaic at the Farmhouse, a tavern, in front of Public Art Committee members Tuesday night at the Noyes Cultural Arts Center.

Evanston tavern Farmhouse trotted closer to its summer opening as a city board endorsed its artistic plan Tuesday.

The tavern’s designer, Peter Hurley, appeared in front of Evanston’s Public Art Committee during a meeting at the Noyes Cultural Arts Center, 927 Noyes St., with a proposal to position a mural behind the bar, which plans to open its second location Evanston this summer at 703 Church St.

The mural would consist of landscape scenes, Hurley said.

“Part of its exterior application of this art is trying to celebrate the rural roots and the farm connections to that part of the town,” he said.

Because the mural did not fall into the strict category of a sign, it was passed down to the committee for consideration as public art, said Jeff Cory, director of the center’s cultural arts division.

The committee unanimously recommended the project to the city’s Sign Review and Appeal Board.

Farmhouse owner TJ Callahan said although the restaurant is opening three months later than expected, the grand opening will be timed with the Northwestern graduation.

The committee also discussed a public arts project at the Sherman Plaza Garage, the second venture completed at the garage inside the Washington National TIF district.

The artist team Krivanek+Breaux will create a multimedia project at the garage, funded by the city’s Percent for Art Program, which allocates a portion of city construction funds to public art works.

Those funds have diminished during the last few years as the city put fewer funds into the Community Public Art Program, Cory said. The committee will try to acquire more funds in next year’s budget, he said.

In addition, committee members discussed adding temporary sculpture displays in private and public venues throughout the city, a suggestion hindered by financial constraints. Artist David Geary, who was introduced as a new committee member at the meeting, said it would be difficult to make high end artists display their work in Evanston for free.

Members brought up the Evanston150 initiative as a possible source of revenue for arts projects.

“There has to be something included for the artist to work out there,” Geary said. “(For) the higher end and quality work, they all want something.”