The Daily Northwestern • May 15, 2013 • https://dailynorthwestern.com/2013/05/15/campus/interactive-performance-makes-audience-choose-where-to-donate-ticket-sales/ 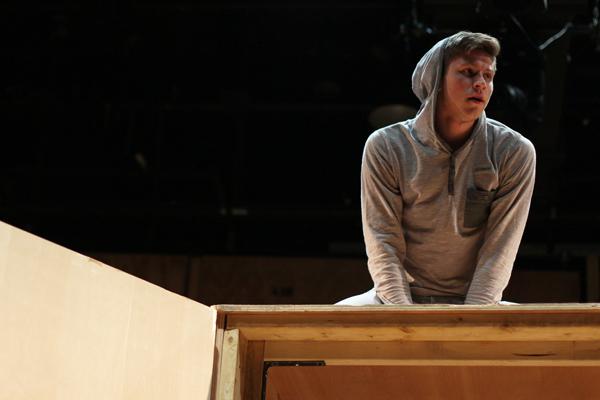 Communication sophomore Brannon Bowers performs a concept of poverty in the interactive piece, How to Solve Poverty in 90 Minutes. The show allows audience members to decide how to allocate $1,000 after learning about different possible organizations.

Communication Prof. Michael Rohd directed an interactive performance Wednesday night focused on engaging the audience in discussion to find an effective solution to the poverty crisis.

More than 120 people attended the performance, “How to End Poverty in 90 Minutes (with 199 people you may or may not know).” After engaging with different concepts throughout the performance, the audience voted on how to donate $1,000 of the ticket sales to attempt to end the poverty crisis.

“I think that participatory theater keeps theater alive because that’s something film and TV can’t do,” said Communication junior Daphne Kim, one of the 16 cast members.

Throughout the performance, audience members discussed which cause most deserved their donation. The cast compiled five different local organizations that deal with issues surrounding poverty based around daily needs, policy changes, education, employment opportunities and individual need. Attendees were not told of the specific organization their money would go toward until after the voting process at the end of the performance.

The performances embodied the different concepts. The audience was organized into small discussion groups and given a limited amount of time to engage with the concepts after learning information and statistics on the poverty crisis through the performances.

“We’re excited to see what the trends are and if people will pick the same place or differ in their approaches to end poverty,” Kim said.

Throughout the 90 minute show, different experts, including Lesley Williams, head of adult services at Evanston Public Library, and Matt Sudman, a volunteer for the Northwestern University Settlement Association, were brought in to answer audience questions on the current state of poverty and the most effective way to invest the money.

“I think it was a cool thing and very thought-provoking,” Weinberg junior Mark Specht said. “It was an interesting concept, but it was pretty rushed. This is a decision that deserves more than the consideration that we gave it.”

Weinberg junior Alice Liu agreed that although the discussion was interesting and unique, the constant reminder of time may have impeded people’s ability to think long enough about the concepts.

“They kept reinforcing the time,” the former Daily staffer said. “It put pressure on you to think in a way that is not the deepest.”

The organization of the performance had a large impact on other members of the audience, said Brighid O’Shaughnessy, founder and artistic director of a Chicago theater company.

There will be eight more performances in the next 10 days. Members of the cast enjoyed the experience and look forward to the next several shows, Kim said.

“It’s been a really awesome journey,” Kim said. “People have had different reactions and some people had emotional responses, which is really cool. People have described it as tremendous, overwhelming and moving.”