The Daily Northwestern • May 14, 2013 • https://dailynorthwestern.com/2013/05/14/campus/conservative-activist-james-okeefe-talks-citizen-journalism-at-hating-breitbart-screening/ 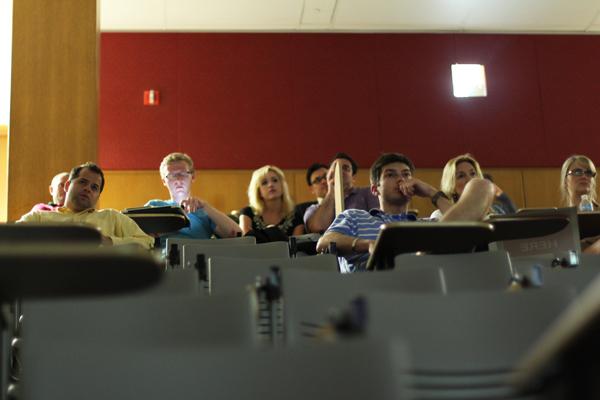 Fans of the late conservative Andrew Breitbart watch a documentary about his life Tuesday night in a Technological Institute auditorium. Conservative activist James O'Keefe and the film's director took questions after the screening.

Conservative activist James O’Keefe on Tuesday urged Chicago-area fans of Andrew Breitbart to take it upon themselves to continue the late provocateur’s legacy.

“I can’t do it alone,” O’Keefe told about 40 people in a Technological Institute auditorium. “They have come at me with everything. I’m still standing.”

O’Keefe, who brought down community-organizing giant ACORN with a series of undercover videos, was on campus to help promote “Hating Breitbart,” a new documentary about the controversial blogger’s life. The film follows Breitbart as he navigates several muckraking projects, leading up to his involvement in the sexting scandal that culminated in the resignation of U.S. Rep. Anthony Weiner (D-N.Y.).

“The documentary showed a side of him we’re not entirely used to in terms of how other media portray Andrew Breitbart,” said Stier, a Weinberg junior.

After an advance screening of “Hating Breitbart,” O’Keefe and Marcus answered audience questions on topics ranging from O’Keefe’s next stories to the libertarian billionaire Koch brothers’ rumored interest in buying Tribune Co.

Asked how online pioneers like Breitbart could gain more traction outside conservative circles, O’Keefe stressed his followers have to understand where widespread exposure lies.

“You have to get covered by the mainstream media,” O’Keefe said. “That’s what success is.”

O’Keefe took particular aim at journalism schools, including the Medill School of Journalism, Media, Integrated Marketing Communications. He laughed as he recalled walking through the McCormick Tribune Center earlier Tuesday, holding up a video camera and finding visibly uncomfortable students.

“There is a sort of fascist disposition toward what I do” at places like Medill, O’Keefe said.

Stier said he invited “at least a dozen” Medill professors to attend the discussion, but none showed up.

Marcus took a broader view of the state of journalism education, stressing today’s students must learn from Breitbart and build their own brands.