The Daily Northwestern • May 12, 2013 • https://dailynorthwestern.com/2013/05/12/sports/womens-tennis-nida-hamilton-kate-turvy-lead-wildcats-to-10th-consecutive-regional-title/ 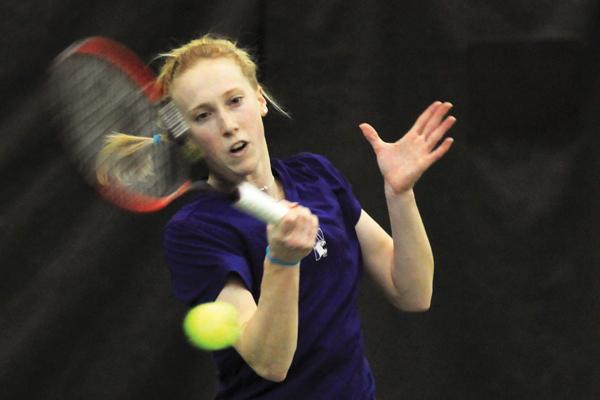 Northwestern senior Kate Turvy won both of her singles matches to help the Wildcats advance to the round of 16 in the NCAA Championships. Turvy won the deciding match Saturday against Baylor with a 6-3, 6-3 win over Victoria Kisialeva.

“I just wanted to try and get out there … (and) get a point for my team,” Hamilton said.

As the first singles player to finish her match, Hamilton was able to cheer on her teammates as they battled against the Bears. Throughout the Combe Tennis Center, the audience could hear Hamilton yelling in support of her teammates with chants of “Let’s go!” and “C’mon!”

“She’s really stepped into the lineup the past seven or eight matches,” coach Claire Pollard said. “It’s hard to step in halfway through the season, but it’s a credit to her to see how hard she’s worked even when she wasn’t in the lineup It’s really fun to see her get some results for us.”

Turvy, ranked No. 57 nationally in singles play, found her match to be a bit more difficult.

“We knew it was going to be a tough match,” Turvy said. “Baylor always plays a great match against us. We were in for a battle and everyone knew that.”

Throughout the season, Turvy has battled numerous injuries and has had to reinvent her serve multiple times.

“It’s been quite a challenge,” Turvy said. “Having to serve underhand and having to make that adjustment, and now coming back to serving regular has been exciting. It’s what I’ve been trying to get back to, but also challenging mentally and physically as well.”

Last time NU faced Baylor, the Cats won 4-1 at the beginning of the regular season. On Saturday, nearly three months from their last meeting, the Cats took down the Bears 4-2.

Not only were the single points important over the weekend, but NU needed the doubles point to win as well.

“You have to (get the doubles point),” Pollard said. “Baylor is so strong in singles. They’re good in doubles, but their strength really lies in singles (play). It’s a point we had to have, as you can see by how close the singles (matches) were.”

The doubles point provided a bit of safety for the Cats going into the singles matches.

Regardless, the Cats are headed downstate to in-state rival Illinois for the Sweet 16. Because the rest of the tournament is closer to home than in recent years, the Cats have more time to practice on their courts.

“I like it,” Hamilton said. “I like being close to home. I’m really excited. We’ll have more fans too.”

This will be the first time any Big Ten school has hosted the NCAA Tournament. In the past, the tournament has typically been held at a school in a warm state such as California, Texas, Florida or Georgia.

“It’s nice that we get to prepare longer at home,” Pollard said. “I hope the weather stays as miserable as it has been. Miami (Florida) is probably playing in 90-degree weather today. I’m hoping that it’s 52 and cold.”

No. 11 NU will face off against No. 6 Miami on Friday in Urbana. Last time the two opponents played each other, the Cats got the best of the Hurricanes, winning 4-2 in February in Charlottesville, Va.