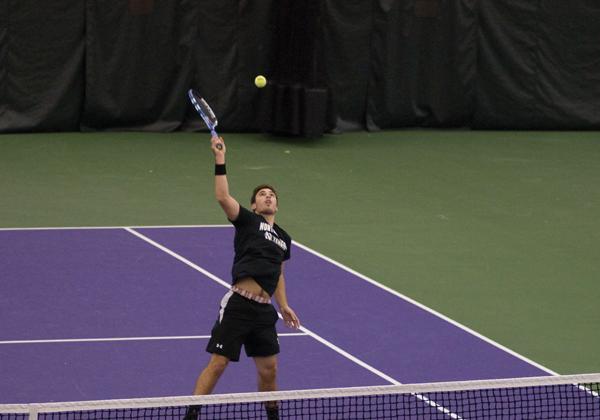 Northwestern tennis player Raleigh Smith has won 20 doubles matches this season. The doubles point will be crucial for the Wildcats to advance in the NCAA Tournament.

Northwestern has been working toward the NCAA Tournament all year, and on Friday, it will finally get the chance to make good on a season of high expectations and tenacious play.

NU set the stage for its conference schedule with wins over Louisville, Notre Dame and North Carolina State during the winter season, three teams against which the Wildcats had not won a match since they beat the Fighting Irish in 2003.

“This is the highest we’ve been ranked since probably (former NU star) Todd Martin’s been here,” senior Spencer Wolf said in March after the team’s first Big Ten match. “But we’re just trying to stay focused. A lot of teams in the Big Ten are ranked pretty high, and we’re really hoping we get to play Illinois again in the Big Ten Tournament.”

Wolf got his wish, as NU’s conference season was bookended by matches against its in-state rival. A 5-2 loss in Champaign began the season, and a 4-2 loss in the quarterfinals to the Fighting Illini at the Big Ten Tournament ended it.

Although the end result was the same, the two matches told very different stories and were indicative of the progress the Cats made over the course of the season.

It is hard not to wonder how different the Cats’ season may have looked had doubles not thwarted them so often. NU suffered three 4-3 losses this season — to Vanderbilt, Harvard and Minnesota, losing the doubles point each time, despite capturing one of the three matches.

The toughest doubles loss for NU to swallow may have been in its most recent, the loss to Illinois in the Big Ten Tournament. Had the Cats pocketed the doubles point, Smith’s loss at the No. 2 singles spot would have leveled the match score at 3-3. With freshman Mihir Kumar leading 3-2 in the third set of what would have been the last match on court, the outcome of that duel could have looked very different.

Despite their doubles setbacks, the Cats have turned out a season of which they can be proud. With a 21-9 record, NU held its own in a consistently strong conference, finishing tied for fifth in the Big Ten and earning its second straight NCAA bid.

But for the Cats, this has been a season of avenging past losses.

“I think we’re very confident,” Smith said. “One of our goals is to try to peak at the right time, so peaking at this time of the year is the most important thing because we want to be playing our best tennis when it comes to the postseason. And I think we’ve done that so far.”