The Daily Northwestern • May 9, 2013 • https://dailynorthwestern.com/2013/05/09/campus/jami-gertz-shares-about-being-jewish-in-entertainment-industry/ 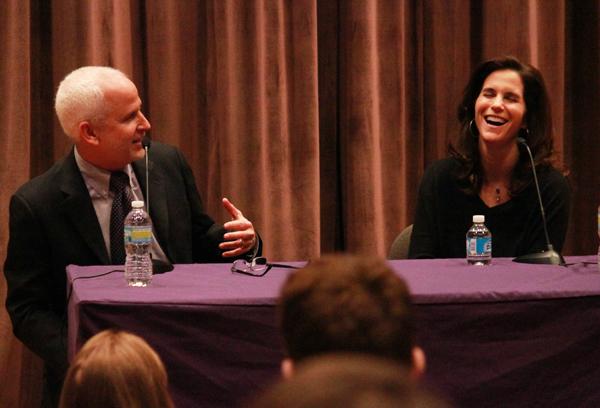 University President Morton Schapiro jokes with actress Jamie Gertz on Thursday afternoon at Annie May Swift Hall. Gertz held a screening of her film, “Keeping Up with the Steins,” and chatted with Schapiro about the role of Judaism in entertainment.

Actress Jami Gertz did not learn much from her appearance in the 2006 comedy “Keeping Up with the Steins.”

Speaking Thursday to more than 40 people in Annie May Swift Hall, the actress admitted she may have gone a tad overboard with her son’s bar mitzvah party, much like her character Joanne Fielder in the film. Gertz mentioned she felt Joanne was the closest she’s ever come to playing herself on the screen, which may explain why she did not learn the lesson from her character.

The story was one of many Gertz told Thursday in her return to Evanston — she participated in the Cherubs program for theater — to talk about Judaism and the entertainment business.
“My Jewish life is my life,” Gertz said. “It’s a big part of who I am and my identity as a human being on this Earth.”

The event began with a screening of the 2006 comedy, which has many ties to the NU and Evanston community. The film was directed by Scott Marshall (Communication ‘91) and features his father, Garry Marshall (Medill ‘56), and Jeremy Piven, an Evanston Township High School graduate.

After the screening, University President Morton Schapiro joined the actress on stage to moderate a question-and-answer session. Much of the session focused on how she juggles being Jewish with job commitments in the television and movie industry.

As a child going to public school, Gertz said she had to miss tests and assignments to observe Jewish High Holidays. Gertz said she has implemented clauses in her contracts to prevent her career from interfering with her Jewish identity.

“I’m probably the only Jewish actress who in her contract has put in that I will not work on Yom Kippur and I will not work on Rosh Hashana, which I’m very proud of,” she said. “It’s just a deal breaker for me. … Sometimes we’re scared to have our convictions and see them through because we’re afraid we’ll be penalized or someone will judge us.”

Gertz said she has never been denied a part in a movie because of her religion, which has allowed her to go to synagogues all over the world. She said her clause has also allowed other Jewish workers on sets of her movies to be able to properly celebrate their faith.

The event was the brainchild of Justin Wolf, a Communication sophomore and intern with the Campus Engagement Corps. Wolf said he wanted to host an event involving a screening and a discussion with a Jew in the movie industry about Judaism in the entertainment world. When Schapiro met with CEC, he mentioned that he knew Gertz and would be able to get her to come to campus.

After the event, Wolf said he was happy with how his vision came to life, although he wishes it had attracted a larger audience.

“The people that were here got a lot out of it,” Wolf said. “I found it very interesting to hear someone who is such a conservative Jew and how they deal with being in the entertainment industry.”