The Daily Northwestern • May 9, 2013 • https://dailynorthwestern.com/2013/05/09/campus/incoming-northwestern-class-sees-record-number-of-chicago-evanston-students/ 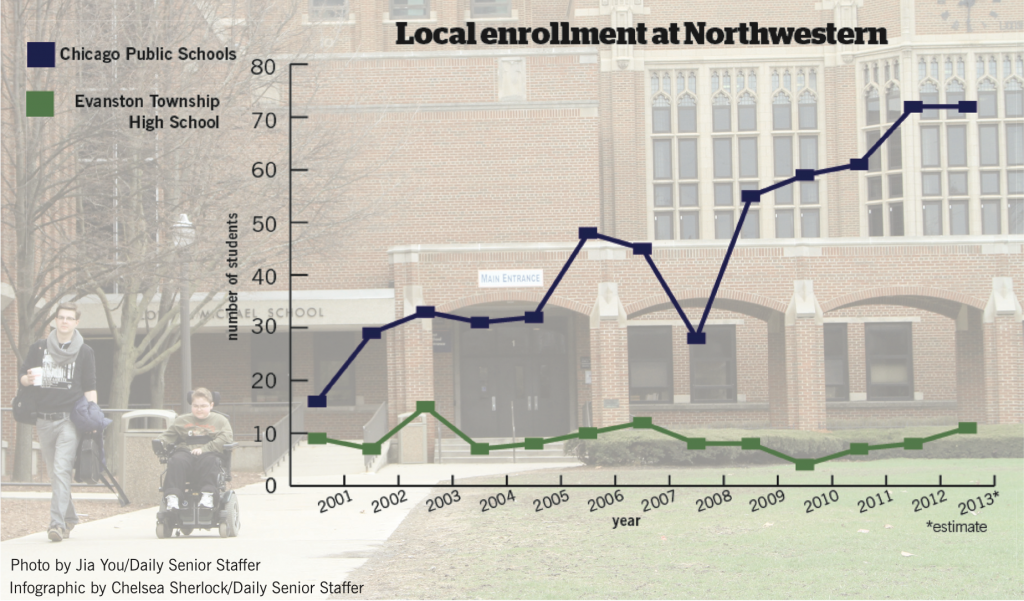 Northwestern admitted a record number of local students to the class of 2017, following a recent admissions office push to bring more students from Chicago and Evanston to campus.

About 72 students from Chicago Public Schools have committed to the class of 2017, the same level as last year. But since 2001, NU has more than quadrupled its CPS student population, according to data from the Office of the Provost.

The class of 2017 will also have 11 students from Evanston Township High School, three more than last year. The ETHS student population at NU has fluctuated over the last decade, but this year marks the the first time in five years with more than 10 admitted ETHS students.

“We have increased our recruiting efforts within the Chicago Public Schools,” said Christopher Watson, dean of undergraduate admissions. “The University wanted to make sure that we were enrolling the best possible students in our backyard.”

Watson described “a concerted effort” to reach CPS since 2008. The efforts have largely paid off: CPS graduates at NU have increased about 31 percent since 2009.

“We also do literally hundreds of events in the city of Chicago,” Watson said. “There’s so many more high schools and fairs that we attend.”

NU is now in its third year of the Good Neighbor, Great University program, which awards scholarships, ranging from $1,000 to $12,300, to admitted students who graduated from Chicago or Evanston public or private high schools. Watson said 158 students currently receive the scholarship.

The University is also wrapping up its first year of a new NU-ETHS partnership, which brought a full-time coordinator to form connections and merge resources from the two communities.

Onis Cheathams, an associate director of admissions who focuses on NU’s in-state recruitment, also said the University has recently increased its Chicago presence since she joined the staff.

“When I first came we only had a handful of schools that we would visit, we didn’t have a lot of visibility,” she said. “Now you find us in just about every high school.”

Despite its close proximity, Watson said NU is not always on the radar for many local applicants.

Since 2009, the University has also given out more than $30,000 in application fee waivers to local students, Watson said. Fernandez said the waivers for local students encouraged her peers to apply.

However, she noted her school is one of Chicago’s academically rigorous selective enrollment schools. Fernandez gives tours to promote NU at less intensive, non-selective CPS high schools, where she said NU is not a popular place to apply.

Fernandez said most of the Chicago students she knows at NU are from selective enrollment schools. College counselors are not as prevalent in the public schools she visits, and many students do not know about all the possible financial options.

“They just think, ‘This is a private school, $50,000, this is what we would have to pay in loans,’” she said. “They have no idea that this good a school is even an option for them.”

Kristen Perkins, the new NU-ETHS coordinator and a former CPS teacher, said the University has also done a good job reaching out to students by inviting them to campus events. The University brings CPS students to many events and symposiums, where Perkins said the University reiterates its commitment to low-income students.

NU recently hosted Kits ‘n’ Cats days in the fall and spring of 2012, to introduce college to ETHS students who would be first-generation students or were not thinking about college. The all-day event — which is named after the ETHS mascot, the Wildkit — was funded by the Good Neighbor, Great University initiative.

On the other end of the spectrum, Cheathams noted that other local students, especially those from Evanston, write off NU as too close to home. But once they get to campus, she said they are excited and surprised by how different it is from their neighborhoods.

“When you’re in high school, you want to go far away,” she said. “To make the decision to attend Northwestern when it is in your backyard speaks volumes about what Northwestern has to offer.”