The Daily Northwestern • May 8, 2013 • https://dailynorthwestern.com/2013/05/08/city/fleetwood-jourdain-community-center-sent-into-lockdown-after-gunshots/ 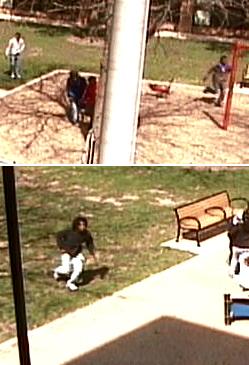 Evanston Police Department officials are trying to identify crime suspects in the photograph who were involved in the gun shooting by Fleetwood-Jourdain Community Center on Tuesday.

The Evanston Police Department has increased patrols and beefed up its manpower in west Evanston after recent reports of gunshots near the Fleetwood-Jourdain Community Center.

Gunshots were fired in the early afternoon Tuesday, sending the nearby community center, 1655 Foster St., into lockdown as residents waited for police to arrive, said Alando Massie, the center’s building coordinator. No one was hurt from the shootings, EPD spokesman Perry Polinski said.

EPD posted images of suspects on its Facebook page, but Polinski said no arrests have been made yet. Police are still investigating the cause behind the gunshots, he said.

>Massie said the incident was the result of a personal dispute and waved off notions that it was gang-related. The recent uptick in gun disputes is an anomaly, said Massie, who has been an community center employee for almost eight years.

“These guys grew up with each other, they know each other,” Massie said. “Whatever personal beef they had seemed to catch up.”

Police are investigating whether recent reports of gunshots in the area are related.