The Daily Northwestern • May 8, 2013 • https://dailynorthwestern.com/2013/05/08/campus/hands-of-support-northwestern-remembers-dmitri-teplov/ 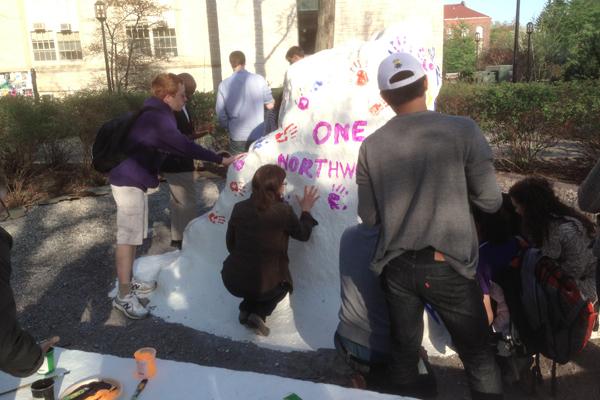 Marianna Teplova, mother of Dmitri Teplov, adds her own handprint to The Rock.

The Northwestern community found itself in an all-too-familiar scene Wednesday evening — gathered at The Rock to remember the life of a student. This time, faculty and students highlighted the humble intelligence of Dmitri Teplov.

More than 150 people came together at 5 p.m. to mourn the death of the McCormick sophomore, who committed suicide in Pancoe Hall on Sunday morning. Teplov is the third NU student who has died this academic year.

Unlike the previous two memorials, which took place at night, classmates, faculty and Teplov’s family shared memories as the sun shone down on the area in front of The Rock.

“When we gather at moments like these, as we have too often and so recently, we speak of hope and love and being our brother’s keeper and our sister’s keeper,” said Associated Student Government president Ani Ajith, a Weinberg junior and former Daily staffer. “We speak of the bonds of community reinforced and strengthened as we endure together the depths of sorrow.”

Many speakers emphasized the bright mind of Teplov, who was a member of the Murphy Institute, an invite-only McCormick program. Teplov’s avid curiosity as a developing engineer set him apart from other students, said Joe Holtgreive, McCormick assistant dean for student career development. Regularly submitting project proposals to his McCormick professors, Teplov demonstrated how he was “constantly thinking and observing,” Holtgreive said.

“He had a way of seeing connections between ideas and understanding relationships between complex systems that most of us just don’t possess,” Holtgreive read from a statement submitted by one of Teplov’s professors.

Although he may not have had the biggest personality in the room, Teplov had “the biggest sense of curiosity,” Holtgreive said, as well as a “beauty of mind” that came from innocence rather than ego, a sentiment echoed by McCormick Dean Julio Ottino.

Murphy Scholars Laura Pettersen and Alex Hollenbeck also spoke of Teplov’s “incredible brilliance” and dry sense of humor, expressing how they wish they had known him better.

“He was one of those guys that would make some witty comment and hours later I would burst out laughing because I finally got it,” said Hollenbeck, a McCormick sophomore, producing a ripple of laughter in the crowd.

Both Ajith and Patricia Telles-Irvin, vice president for student affairs, reminded students to support one another. Ajith said students should ask about their peers’ well being, “before the seat is empty.”

Teplov’s mother, Marianna Teplova, spoke briefly at the end of the service, thanking everyone for sharing memories of her son.

“I see now that he was not alone here,” she said.

After the speakers finished, Teplova described her son to The Daily as “a very lovely kid, kind and funny.” He was the best person for her family, “the only one,” she said.

“This was absolutely unexpected for us,” she said. “I was amazed by how many people shared their remembrance of Dmitri.”

Following the service, both students and administrators lined up to overlay colored handprints on The Rock’s white paint. Former ASG president Victor Shao painted a purple “One Northwestern” in the center.

“This is very sweet,” Teplova said as she watched a rainbow of handprints spread across The Rock.

As they wiped paint from their hands with paper towels, several students approached Teplova, grasping her hands and expressing their sympathies.

After many students had placed their handprints, Teplova covered her own hand in bright orange paint, climbed over the stone wall in front of The Rock and pressed her small hand among the others.