The Daily Northwestern • May 7, 2013 • https://dailynorthwestern.com/2013/05/07/city/evanston-asg-likely-to-pass-anti-drone-legislation-in-unprecedented-joint-resolution/ 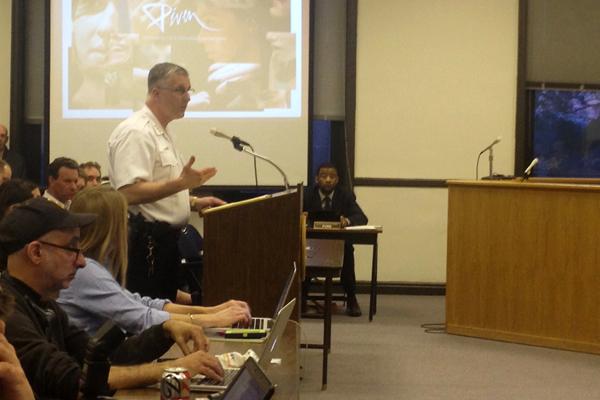 A moratorium on the use of drones in Evanston will be the topic of the first potential joint resolution between City Council and Associated Student Government.

“It would be both a symbolic step towards improving Northwestern and Evanston relations as well as having a practical and realistic benefit of stopping unnecessary drone surveillance in Evanston,” said Steven Monacelli, ASG’s former community relations vice president.

The Communication senior said he and three ASG senators are sponsoring the legislation as part of their commitment to representing the interests of students on and off campus.

“If Evanston (police) were to have drones, they could hypothetically use them for whatever surveillance purposes they wished,” said Monacelli, a former Daily staffer. “Student houses or backyards could be investigated without a warrant.”

After discussing a draft of legislation proposed by Ald. Jane Grover (7th) to ban drones from the city, the human services committee voted unanimously to recommend the bill to the council. Grover cited privacy concerns in her argument supporting the legislation, which would place a two-year moratorium on drone use in Evanston.

“Many of us are concerned about the lack of regulation for these unmanned aerial systems,” Grover said.

Evanston Police Department Chief Richard Eddington also spoke at the meeting in support of the moratorium. Eddington said drones would be useful in search-and-rescue missions, such as when looking for people in Lake Michigan, but that the ban would provide adequate time to assess whether the city should purchase one.

“I’m a fan of not being the first to try it,” he said. “This is not hampering us in any way at this time.”

The committee’s decision to support the resolution comes just weeks after the Illinois State Senate passed a bill sponsored by state Sen. Daniel Biss (D-Evanston) regulating the use of drones.

Although the debate over drones has been taking place at all levels of government, the drones addressed by the state and city bills are very different from the ones used for international surveillance and military strikes, Eddington said.

“When you say that word, everybody thinks of a U.S. Predator, Global Hawk, big Hellfire rockets,” Eddington said. “We’re not talking about that.”

After the Evanston bill is brought before the council, ASG Senate will consider passing the same legislation, Monacelli said, adding that he does not expect it to face any strong opposition.

Several residents who support the bill also spoke out during the committee meeting. Marcia Bernsten, a member of the activist organization Chicago Area Peace Action, said Evanston should lead the movement to pass drone-regulating legislation.

“A lot of communities are looking to see what a progressive community like Evanston is going to do with this particular issue,” she said. “We want to be on the forefront. We want to be the first in Illinois to say this is really not a great idea.”