The Daily Northwestern • May 6, 2013 • https://dailynorthwestern.com/2013/05/06/sports/baseball-late-home-run-devastates-northwestern-in-loss-to-ohio-state/ 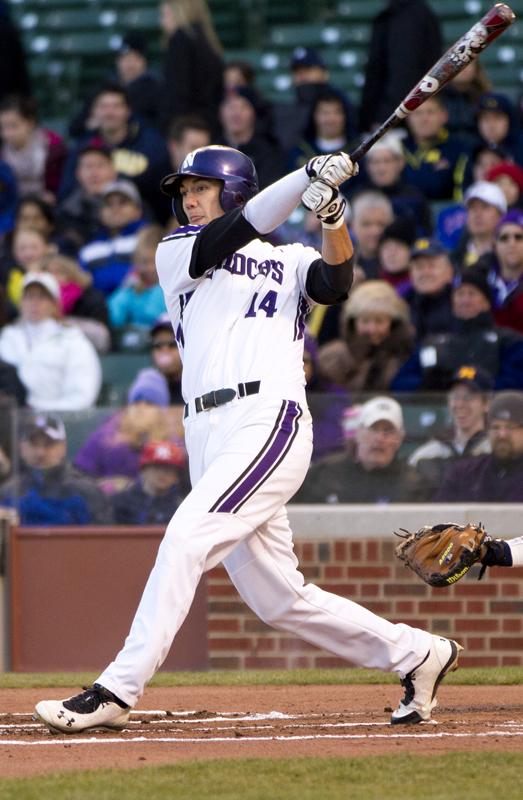 Northwestern pitcher Zach Morton avoided danger in his first seven innings of work. However, the redshirt senior put two men on in the eighth inning before being pulled from the game. Ohio State eventually hit a 3-run home run to take the lead and subsequently win the game.

“That’s something you don’t want to see,” junior third baseman Nick Linne said of the home run. “It’s tough now because we know our odds. We see we can’t make the tournament anymore, and that’s a little upsetting.”

Through seven innings the game’s top story was NU starting pitcher Zach Morton. Up to that point, the right-hander had allowed 1 run on 2 hits and, true to form, only 3 strikeouts. His final punch-out came with a runner on third base and 2 outs, an appropriate would-be end to his outing.

“There was some talk (of taking me out),” Morton said. “But I said I was feeling OK, so they let me go out for the eighth.”

Coach Paul Stevens said he never considered removing Morton, and the way he lauded the redshirt senior after the game, it’s no wonder.

“Gutsiest guy I know alive,” Stevens said. “That man can play. He’s a warrior and a half … He’s still our best fielder. He’s our best athlete, he’s probably our best player, and he’s probably the guy who wants it as much as anybody I’ve ever been around.”

With that in mind, Stevens let Morton return for the eighth.

The Buckeyes began the inning with back-to-back singles, and after a sacrifice bunt attempt failed to advance the runners, Morton departed the mound with 1 out and a 1-run lead. Stevens turned to his closer, junior Kyle Ruchim, who swapped positions with Morton, taking the hill as Morton jogged to second base.

Ruchim’s second pitch didn’t come back. Pellant’s homer spoiled Morton’s final home start and sent the Cats to defeat. The Buckeyes closed the inning with another run, then another in the ninth off junior Jack Livingston, but the insurance proved inconsequential, as NU failed to score in the eighth or ninth.

The Cats scored their runs in the bottom of the second on a 2-run single from Linne but sputtered from there, managing only 4 more hits.

“We were having a little trouble getting the bats going a little bit today,” Linne said. “Had some trouble stringing some hits together.”

Ohio State’s first run came in the sixth inning. Nine-hitter Brad Hallberg was hit by a pitch, and leadoff-man Joe Ciamacco walked after watching several borderline pitches that were called balls. After the runners advanced to second and third on a groundball, Hallberg scored on a wild pitch.

But the big blow was the go-ahead long-ball. Monday was the second consecutive day the Cats blew a late-inning lead, and those two losses, in addition to a similarly close defeat April 28 against Illinois, buried the Cats’ playoff hopes.

Barring the most improbable of circumstances, beginning with NU sweeping second-place Indiana next weekend, the Cats will not participate in this season’s Big Ten Tournament in Minneapolis.  Their visibly emotional coach admitted the losses are difficult to swallow.

“The good thing is I don’t sleep much at night anyhow, so it hasn’t kept me up anymore,” Stevens said. “I’m not going to sit there and tell you it’s not tough … The way that we keep battling — and unfortunately we’ve had some tough games in the eighth and ninth innings. There’s not one guy that’s not giving me everything that he has. I won’t question any of that. At the end of the day I still believe in these guys.”