The Daily Northwestern • May 5, 2013 • https://dailynorthwestern.com/2013/05/05/sports/softball-northwestern-swept-by-michigan-to-end-regular-season/ 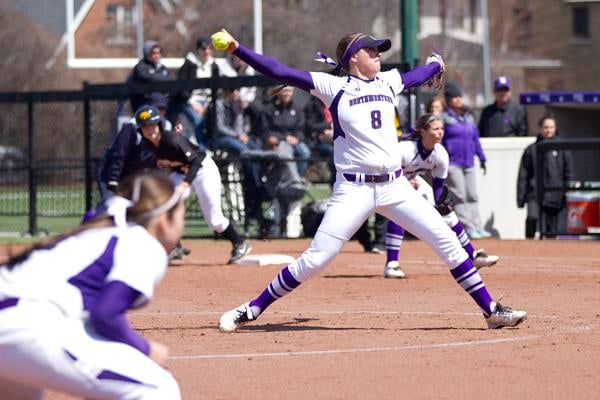 Northwestern pitcher Amy Letourneau picked up two losses this weekend as the Wildcats were swept by Michigan. The sophomore helped her own cause Sunday with a three-run home run, her 12th of the season, to give NU a brief 3-2 lead.

The Wolverines’ bark seemed to be as fierce as their bite this weekend.

No. 10 Michigan swept Northwestern in a three-game series hosted in Ann Arbor, Mich., concluding the regular season for the Wildcats.

NU heads into the Big Ten Tournament starting Thursday as the No. 5 seed, squandering its chance at the No. 4 seed and a bye with the three losses to Michigan. The Wolverines’ three victories locked up the top seed in the tournament.

“We’re much better than the beginning of the season,” sophomore pitcher Amy Letourneau said. “We have room to grow from this weekend, and we just need to show the fight we did (Sunday) and bring it into the tournament.”

Letourneau opened the weekend in the circle for the Cats on Friday, pitching well despite the 2-1 loss. She came back Sunday to limit the Wolverines until the final couple of innings, when Michigan extended its margin of victory to 9-3.

“Amy did a nice job mixing it up,” coach Kate Drohan said. “They just got to her by the end of (Saturday).”

The Wolverines struck first in the third inning on a 2-out single, giving them a 1-0 lead.

The Cats responded in the top of the fourth: Letourneau, sophomore Anna Edwards and sophomore Andrea DiPrima strung three singles together on two outs, tying the game at one apiece as Letourneau crossed the plate.

After two 1-2-3 half innings, Michigan got it going again in the bottom of the fifth. Following a leadoff double, Letourneau struck out the Wolverines’ top offensive threat, Jaclyn Crummey. However, Michigan was able to get the runner around, thanks to two consecutive singles, giving it a 2-1 lead it would not relinquish.

“They do a nice job clutch hitting,” Drohan said of the Wolverines.

The next game was a whole different beast for the Cats.

NU fell 16-1 to Michigan in a five-inning run-rule. The Wolverines got on the board early with a two-run first inning and then a four-run second. Senior Meghan Lamberth started the game for the Cats but was relieved in the second inning by junior Sammy Albanese after Michigan’s second multi-run home run of the game.

The Cats knocked in their 1 run in the top of the fourth on a sacrifice fly by Edwards.

The bottom half of the inning was all Michigan. The Wolverines pushed the game to 9-1 on a double to right center and a two-out error by the Cats allowed Michigan to push it all the way to 16-1. The Cats were unable to score in the top of the fifth, ending the game in a mercy rule.

The teams’ final meeting proved more like the first game at the beginning, with the two teams battling within one run in the first few innings.

The Wolverines struck first as they did every game of the series, going up 2-0 in the bottom of the first after a series of NU mishaps.

The Cats battled back in the third with a 3-run homer by Letourneau to put them ahead 3-2.

However, NU’s lead did not hold long. Michigan came back in the bottom of the inning with a 2-run home run of its own to go up 4-3 and continued the inning, extending its lead to 7-3 with another 3-run homer.

A 2-run double in the bottom of the sixth added 2 more runs to the Wolverines’ total, giving them a 9-3 lead they would not let up.

“They do a good job stringing hits together and getting big hits when they need them,” junior Marisa Bast said.

Bast also said it was not just the Wolverines’ offense that contributed to their success this season.

“They did a good job mixing it up on our hitters, and we didn’t make adjustments quickly,” she said of Michigan’s pitching. “They kept the ball down.”

The losses lowered the Cats’ record to 30-21 on the season and 12-10 in conference, entering the tournament as a five seed.

Despite the losses, the Cats say they feel confident headed into the weekend and even hope for the chance to face the Wolverines again.

“Michigan is a good team,” Letourneau said. “They have a lot of power and are very successful. They won the regular season. Hopefully we get a chance to play them next weekend. We were starting to get on their pitching, and our hitting was picking up. It’s just a matter of time before we beat them.”