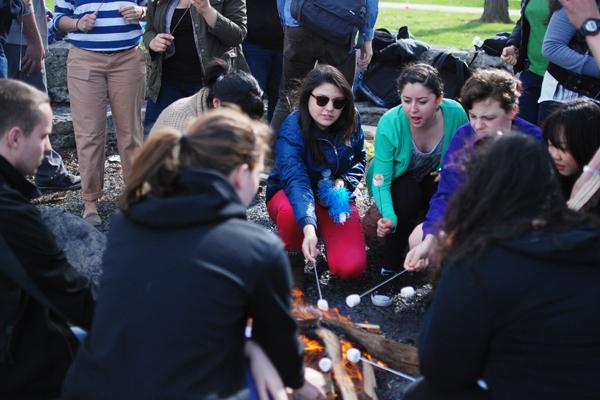 Students roast marshmallows over a fire during the Alianza Fuego Bonfire Sunday afternoon. The event not only celebrates Cinco de Mayo, but also aims to show how to respectfully celebrate the holiday.

Rather than celebrating Cinco de Mayo with tacos or tequila, a group of Northwestern students gathered Sunday at the Lakefill to roast marshmallows and break pinatas.

The Alianza Fuego Bonfire, which brought together Latino groups from across campus, came just one day after representatives from Alianza and Associated Student Government emailed the student body calling for “respectful” Cinco de Mayo celebrations. The email reminded students to not throw “Mexican-themed parties” and encouraged them to learn the real meaning behind the holiday.

“Drinking tequila shots, eating tacos, and wearing sombreros do not commemorate Mexican culture; on the contrary, that offends, marginalizes, and isolates many of our friends, classmates, and community members, and casts our entire community in poor light,” the Alianza and ASG representatives wrote.

Alianza co-president Sobeida Peralta, a Weinberg sophomore, said the bonfire was originally scheduled for Fall Quarter but was canceled due to poor weather. The bonfire is an annual event that brings together Latino-interest groups across campus. She said the group is considering hosting the bonfire on Cinco de Mayo every year.

“We’re not telling people not to celebrate Cinco de Mayo,” Peralta said. “We have seen, maybe unconsciously, that people have certain parties that hurt certain cultures or are offensive to other cultures.”

Alianza co-president Darlene Reyes, a Weinberg sophomore, said the email was not intended to stop students from celebrating or tell them how to celebrate, but rather to make them think about how to celebrate. She said she does not think many NU students know the reasons behind celebrating Cinco de Mayo.

The holiday commemorates the Battle of Puebla, in which the Mexican army defeated the well-trained French army twice. In the email, the students explained the holiday is celebrated primarily within the Mexican state of Puebla and in the United States.

“We’re not talking about how to celebrate it,” Reyes said. “We just want you to educate yourself on the topic so you realize certain things are insensitive, and there are certain things that you should know about the holiday in general.”

“We felt it was important to get the right message out there,” said Ajith, a Weinberg junior and former Daily staffer. “We were not trying to blame people or make them feel bad.”

Weinberg senior Leticia Saenz, a member of the LaFe Latino Intervarsity Christian Fellowship, said she celebrated Cinco De Mayo with her family growing up. She said the Lakefill gathering was a great way to commemorate the day.

“I think we just try and best celebrate our heritage,” Saenz said. “I love the idea of being outdoors. A lot of the times we’re just so accustomed to being in a certain space on campus. … It gets us out in the open, and people can acknowledge that we’re here, and we have a presence.