The Daily Northwestern • May 2, 2013 • https://dailynorthwestern.com/2013/05/02/sports/baseball-wildcats-host-buckeyes-looking-for-a-sweep/ 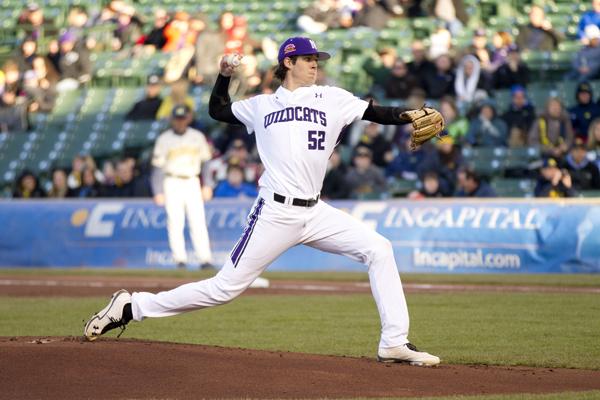 Northwestern Luke Farrell leads all starters with a 1.79 ERA this season. The senior will pitch Saturday against Ohio State.

Although they won’t admit it, the Wildcats know they need a sweep.

Entering a weekend series against Ohio State (30-13, 12-6), Northwestern (19-18, 7-11) faces an uphill battle to qualify for the Big Ten Tournament as one of the conference’s top six teams. The Cats stand eighth in the Big Ten with six conference games remaining on their schedule, chasing Illinois and Michigan, both 8-7 with nine Big Ten games to play.

Yet coach Paul Stevens insists that is not on his mind.

Weather delays pushed back the series at Rocky Miller Park, which now will be held Saturday through Monday.

NU has lost four of its last six games, scoring only 15 total runs over the stretch and no more than 4 runs in any of the contests. Reaching base has not been the Cats’ problem. They racked up 34 hits in a three-game set to Illinois last weekend but tallied only 10 runs and lost two of the three games.

“We’re still putting up eight, ten hits (per game),” junior Kyle Ruchim, the team’s leader in batting average, said. “I think we’re hitting the ball well, but as far as runners in scoring position, I don’t think we’re doing a great job, and that’s why we’re not putting as many runs on the board.”

Senior Luke Farrell will start for the Cats on Saturday. Farrell is second in the Big Ten in ERA (1.79), third in batting average against and second in strikeouts. Sophomore Brandon Magallones (3.82 ERA) will start Sunday and Zach Morton (2.43 ERA) on Monday.

A bad start from any of NU’s big three could mean an even more diminished, if not mathematically nonexistent, chance at the Big Ten Tournament. Still, a “one day at a time” mindset persists.

“We’re really just worried about Friday,” Ruchim said before the series opener was delayed to Saturday. “Obviously we want to take all three games. Anytime we go into a Big Ten series, that’s what we want. But really, just Friday coming out strong, that’s our mindset right now.”

The set with Ohio State will be the final home series for redshirt seniors Morton and Trevor Stevens and seniors Farrell, Colby Everett and Jack Havey. NU will play one final home game against Chicago on May 8, then take to the road for the remainder of the season.

“This team is nothing but supportive,” redshirt sophomore Scott Heelan said.  “And we have some great chemistry and some great guys here. Unbelievable senior leadership. So I think between all of that and how hard we’ve prepared all year, we’re going to come into this weekend and really do the right things and just have some fun out there.”