The Daily Northwestern • May 1, 2013 • https://dailynorthwestern.com/2013/05/01/campus/asg-senate-hears-presentation-on-alcohol-policy-debates-10k-initiative-funding/ 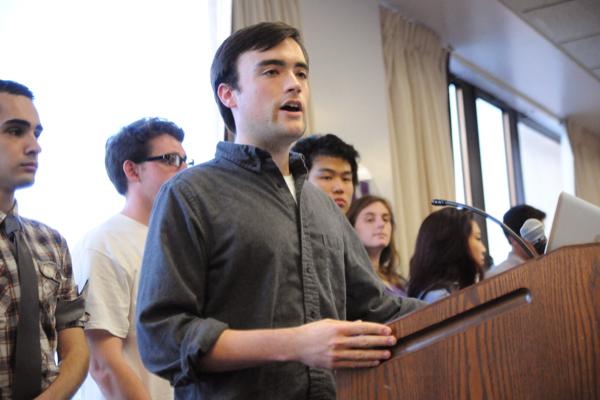 After an Associated Student Government working group presented its findings on Northwestern alcohol policy to Senate on Wednesday night, a heated debate broke out over amendments to the organization’s budget.

The alcohol policy and culture investigative group proposed changes to the education and third-party risk management parts of NU’s alcohol policy and shared the results of a survey taken by more than 500 students. These findings indicated many do not fully understand the University’s Responsible Action Protocol for dealing with students who reach out for help for a friend. Following the presentation, the ASG 10K Initiative proved to be a point of contention, but Senate eventually passed the budget with the disputed amendments failing.

The working group said more than half of student respondents incorrectly included “caller amnesty” as part of the protocol. The group proposed changes to the Wildcat Welcome Essential NU program for alcohol education that would include information about the protocol.

“The Alcohol ENU is one of the biggest instances that this school talks about alcohol, but they’re not talking about Responsible Action Protocol, which is a pretty big part of our alcohol policy,” said Rex Tai, treasurer for Students for Sensible Drug Policy and a Weinberg sophomore.

Additionally, the group proposed training students to work as party monitors, an initiative called Wildcat Watch. Students in the initiative would be paid by the University, ASG and other sponsoring organizations. They would also be trained to monitor parties looking for hazards and work with the host to ensure the safety of partygoers. In its presentation, the working group emphasized that Wildcat Watch monitors would not be liable for anything that might happen at parties and would simply function as “an extra set of eyes.”

The working group was dissolved and ASG is now in charge of acting on its recommendations.

Off-campus caucus whip and Weinberg senior Ian Coley first proposed to completely eliminate the 10K initiative from ASG’s budget, which drew strong criticism from other members of ASG, including former ASG executive vice president Brad Stewart, a Medill senior. The amendment was overwhelmingly voted down after more than 15 minutes of discussion and a five-minute recess during which executive members determined whether or not the amendment violated parliamentary policy.

Following the vote against that amendment, another senator proposed a different one reducing the initiative to $5,000 instead of $10,000, which also generated controversy. In a speech in support of the amendment, off-campus senator Mike Morgan said even though vice president of student affairs Patricia Telles-Irvin is “kind of a witch,” Student Affairs should continue to provide half of the funding as it did this year because it brought important issues to her attention and to the administration in general.

“One of the reasons why I’m interested in maintaining it at $5,000 is because … it really brings into the consideration of the administration some of the issues going on on campus,” said Morgan, a Weinberg junior. He later apologized for his comment about Telles-Irvin.

The amendment to reduce the 10K Initiative was also overwhelmingly defeated, and the budget ultimately passed.

In addition, the Senate formed a committee to analyze and recommend improvements to the structure of the Senate itself in order to address issues of senatorial attendance and commitment to constituents. Senators also passed a bill providing funding to the Deering Days event Dancing on Deering, which will take place in May and include performances, dance workshops and food on Deering Meadow in an effort to bring together students from diverse groups on campus.

Correction: A previous version of this story misstated when the Dancing on Deering event will take place. The event will occur in May. The Daily regrets the error.