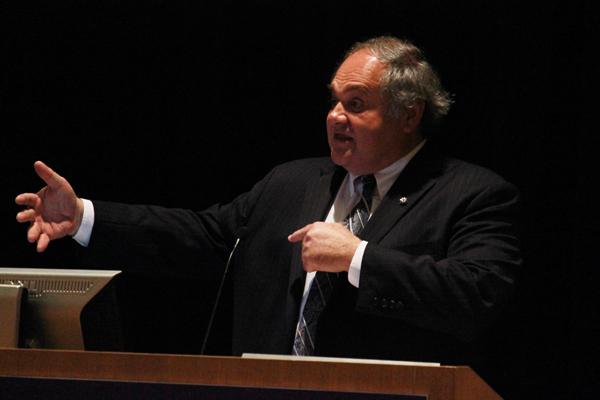 The chief executive officer of Prevent Child Abuse America and an abuse survivor shared their personal experiences and promoted prevention efforts Tuesday at an on-campus event.

The speaker event kicked off Kappa Delta’s Prevent Child Abuse Week, which is dedicated to raising awareness and money through several initiatives such as a cardboard regatta and pinwheel sales. CEO Jim Hmurovich and survivor Laura Delman, who is also a PCAA board member, discussed the importance of investing in healthy children and families.

“We want to have a society, a culture, a nation in which every child has the right to grow up in healthy developmental ways, have happy childhoods that transition into adulthood and become very good members of the community,” Hmurovich said.

PCAA began to develop a plan to “fill in the gaps” on child abuse prevention laws and policies, Hmurovich said. He said the organization wants to create a movement to invest in children’s well-being, and that these investments are just as important as other policy issues like national security.

“There’s plenty of research that tells us what to do about this, and yet we choose not, as a society, to implement that for some reason,” he said.

Hmurovich cited a UNICEF study that ranked the United States 26th in children’s overall well-being, out of 29 developed countries. He said many costs of hospitalizations and sustaining correctional facilities stem from childhood abuse.

Delman, 57, said financial stress, alcoholism and other factors played a role in her abuse. Community support and initiatives have grown since her own childhood experience, but many of these efforts focus on responding to abuse instead of preventing it, she said.

“The good news is I’m a survivor,” she said. “The great news is I am thriving.”

Delman recommended several prevention methods for individuals, such as engaging children in a healthy way, promoting good parenting skills and reporting suspected abuse. She reported her own abuse to her high school counselor, and she said it helped prevent her younger siblings from getting abused.

“Just like broken bones, when we heal, sometimes we are stronger in the broken places,” Delman said.

Sharon Guan, KD vice president of community service, said the organization reached out to the city as well as the NU community. She said this event is part of an effort to help people understand the cause behind philanthropy events.

“This is the first time we’re really trying to connect the cause to the efforts,” the Weinberg sophomore said.