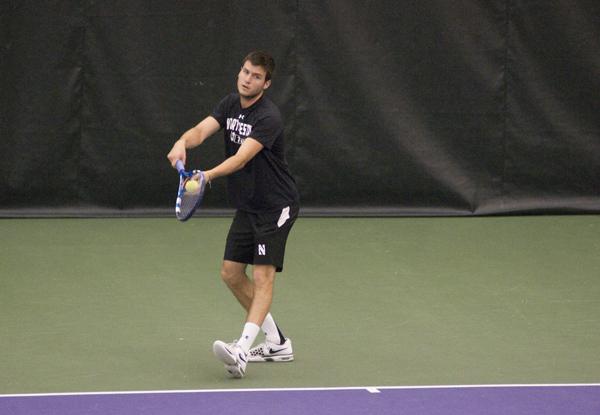 Northwestern tennis player Raleigh Smith was one of the two Wildcats named to the All-Big Ten first team. The senior was joined by classmate Spencer Wolf on the team, becoming the first two NU players to earn the distinction since 2006.

The rivalry between Northwestern and Illinois has not been a favorable matchup for the Wildcats in recent years, with their last win over the Fighting Illini coming in 1997. But in Friday’s quarterfinal match at the Big Ten Tournament, NU threw everything it had at Illinois and nearly scored the upset over the No. 4 seed.

“They played a good doubles match against us,” coach Arvid Swan said. “In singles, we stuck with them throughout the entire match and gave ourselves a chance to win at the very end of that match. Our effort level and competitiveness in that match was very good. We really were right there at the end.”

But the match did not get off to the fastest start. Doubles again flummoxed the Cats, and they went 0-2, marking the 10th time in 13 Big Ten matches that they have failed to take the first point of the match.

“We’re all kind of looking for answers,” junior Raleigh Smith said of NU’s trouble on the doubles court this season. “We’re using different teams this year than we were last year, but everybody understands the type of doubles that we expect to play, and we practice that. I don’t think we’re as far off as the results may indicate in terms of wins and losses. I think we’re right there.”

When singles play started, NU made its move. Senior Sidarth Balaji quickly took out Bruno Abdelnour 6-2, 6-2, avenging his loss to the Illinois senior in a meeting between the two teams last year.

Although senior Spencer Wolf  had surrendered his match in the No. 1 spot for straight sets to No. 31 Jared Hiltzik, the Cats held a one-set lead in three of the remaining four matches, with the overall scored tipping in favor of the Fighting Illini 2-1.

Senior Chris Jackman stormed back from a 5-1 deficit in the first set before falling 7-5 and fought his way into a second-set tiebreaker before Farris Gosea claimed the win.

Within a point of defeat, NU did not back down. Sophomore Alex Pasareanu quickly took the lead in the final set at the No. 5 position after dropping the tiebreaker in the second and ran off a 6-1 third set to keep the Cats’ hope of an upset alive with two matches to play.

“It really comes down a couple points in a few matches,” Swan said. “It really could have gone either way and I don’t think it was one particular tactic or something that Illinois used. It was just two really competitive teams playing one another and that day, they won the match.”

Still on court, Smith and freshman Mihir Kumar had both won their first sets but were forced to go the distance by their Illinois adversaries.

Smith stayed neck-in-neck with his opponent before Tim Kopinsk edged him out in the final games of the third set, taking the match 4-6, 6-3, 6-4 to give Illinois a berth into the semifinals.

To cap off the weekend, Wolf and Smith were both named to the All-Big Ten first team, marking the first time NU has had an individual granted the distinction since 2006. Smith tied with Balaji for the most wins on the team for the entire season with a 25-9 record, while Wolf earned at 18-15 record, anchoring the No. 1 spot almost exclusively.

“It is pretty cool,” Smith said. “The coaches vote on it so it’s obviously nice to be respected by your peers. It’s pretty cool me and Wolf got it. But as nice as it is, it doesn’t give us any points in any kind of duel match, which is the goal at the end of the day.”