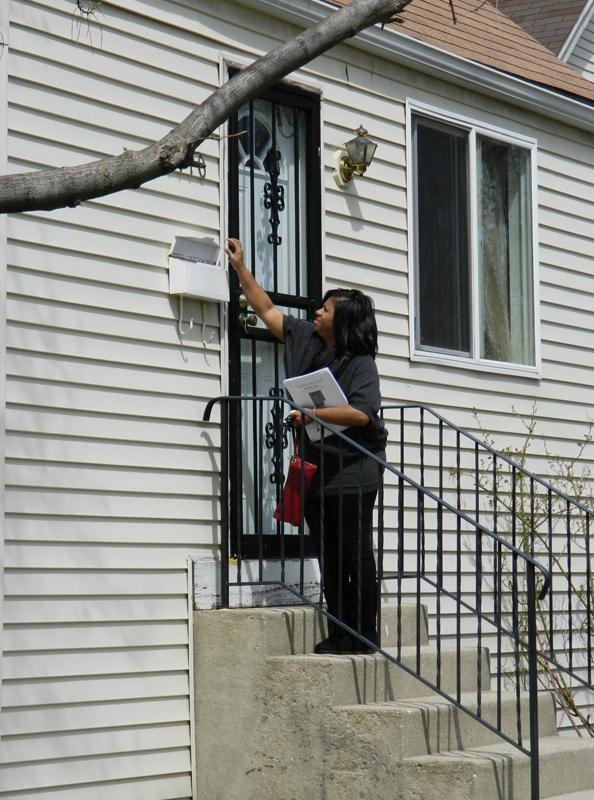 Evanston resident Cathy Key flyers in the 1800 block of Brown Street, where Evanston teenager Justin Murray was shot dead in November. Key and other Evanston residents volunteered Saturday with Cook County Crime Stoppers to gather information for the ongoing investigation into Murray's death.

In the face of increasing community pressure, the Evanston Police Department is ramping up its efforts to address gun violence and unsolved homicides in the city.

The most recent in a string of new initiatives is a communications policy that requires homicide detectives to contact a victim’s family one month, six months and one year after the crime was committed. The new policy comes as the department expands its anonymous tip program and looks toward the city’s second gun buyback.

Evanston Police Cmdr. Jay Parrott said the new policy builds on an older one that called for more frequent reports from detectives.

“This way we feel is the most effective to ensure that family members are being contacted and that they’re getting updates,” Parrott said.

The communications overhaul comes amid heightened scrutiny of the department from community members like Carolyn Murray, whose 19-year-old son Justin was shot dead in November.

Murray said she learned about her son’s case only by being proactive and constantly calling the cops and asking for the latest updates.

Concerns like Murray’s came to a head Thursday night at a community meeting on unsolved homicides led by EPD Chief Richard Eddington. An anonymous question submitted to the department during the event asked, “Why does it feel as if the EPD could care less about solving a murder or keeping in contact with the families?”

The department is also taking steps to reduce the number of illegal guns on city streets with the expansion of the Text-A-Tip, a program to submit anonymous tips via text message. The current program allows residents to anonymously submit tips to police via text.

The program, initiated in 2011, has been used frequently to gather information about illegal narcotics, Parrott said. The expanded program will take tips on illegal guns and reward tipsters with $100 in cash if their tip leads to an arrest and gun recovery.

Parrott said Text-A-Tip targets those who are more likely to be involved in violent crimes.

“When people carry a gun illegally, there’s a higher percentage of that individual and that gun being used in a crime of violence,” Parrott said.

The Text-A-Tip reward money comes from the leftover funds from Evanston’s first gun buyback, which was held in December and netted 45 firearms. Police facilitated the event, which was organized by community activists and rewarded everyone who turned in a gun with $100.

Murray said a second gun buyback has been set for June 29. She is also planning a prayer march and anti-violence rally for June.

“We’re inviting churches and organizations to talk to kids and tell them … what they can do this summer instead of hanging out on the streets and getting shot at,” Murray said.

The department reached out to Cook County Crime Stoppers to help investigate the fatal shooting of Justin Murray. Crime Stoppers takes a grassroots approach to information gathering and works as an intermediate organization between communities and the police to gather information about felony-level crimes.

About 20 people gathered Saturday morning in the block where Murray was shot dead, near the intersection of Brown Avenue and Church Street, to pass out flyers to the neighborhood’s residents. The flyers advertised a maximum $1,000 cash reward to anyone who can provide information that leads to an arrest.

Crime Stoppers chairman George McDade said the organization’s system of anonymous tips makes people more likely to provide information than they would to the police. Crime Stoppers relays all tips it receives to the local police department.

“It’s one thing to bury my son, but I should not have to not know what happened to him in the moments before he was killed,” Murray told family and friends Saturday.

Evanston resident Cathy Key was among the volunteers to go door-to-door and pass out flyers Saturday. Key’s son David Branch was stabbed to death in 2010, and a suspect was arrested the same week of the 26-year-old’s death.

Key reached out to Murray in the aftermath of Justin’s death.

“We both lost our sons, but she’s experiencing it on a different level because no one’s in custody, so she has absolutely no closure,” Key said. “And she wants justice for Justin.”