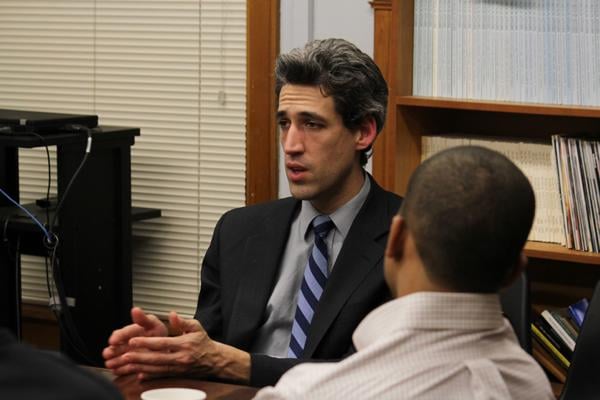 State Sen. Daniel Biss (D-Evanston) is the chief sponsor of a bill that would abolish local election boards that decide whether prospective candidates who face petition challenges stay on the election ballot.

Senate Bill 1689 would transfer responsibility for deciding objections to candidacy petitions from the local to the county level. Biss has criticized the current system — in which local election boards decide whether challenged candidates stay on the ballot — as biased in part because local races are dominated by incumbents.

“With so many local races uncontested, we should allow voters meaningful choices at the polls whenever possible, not perpetuate an institution with incentives to err on the side of denying access,” Biss said in a news release.

Evanston’s election board is made up of Mayor Elizabeth Tisdahl, Ald. Ann Rainey (8th) and city clerk Rodney Greene. Although the local board did not act on challenged petitions in the April 9 elections, a supporter of Ald. Judy Fiske (1st) raised an objection to challenger Ed Tivador’s candidacy that was later dropped.

Greene said assigning electoral board responsibilities to Cook County election officials would be a disservice to Evanston residents who use local electoral board meetings as a forum for discussion.

“The objections will fall between the cracks,” Greene said.

Once residents bring their objections before the electoral board, its members check the accuracy and fairness of the challenges, Greene said.

An investigation by the Chicago Tribune in March on local election boards in the Chicago area, however, brought attention to possible conflicts of interests in the system. The Tribune showed that challengers’ petitions for candidacy were often denied by allies of the incumbent who sat on the election boards.

Prospective candidates had been knocked off the April 9 ballot for reasons such as failing to fasten a petition for candidacy tightly enough with a paper clip, according to the Tribune.

“I just think any time you can add a layer of objectivity and neutrality … it’s going to be good for the electoral process,” Grover said.

Sen. Napoleon Harris, (D-Flossmoor) one of five Senate sponsors of the bill, suggested it would help combat corruption among local election boards.

“Anyone should have an opportunity to run for office,” Harris (Communication ‘02) said. “I don’t think anyone should be kicked off the ballot for (reasons of) status.”

Any person whose candidacy is denied by the election board could still compete as a write-in candidate, Greene said. Abolishing local election boards would distance voters from the electoral process and eventually discourage people from voting, he said.

“When no one has an opportunity to express objections to candidates, that also is negative given their right to question,” Greene said.

Correction: Due to an editing error, a previous version of this story misstated the number of sponsors of the bill. There are five Senate sponsors and six in total. The Daily regrets the error.