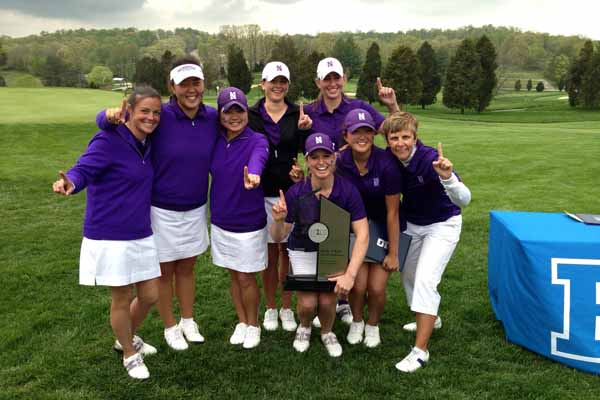 Northwestern won its first Big Ten title this weekend in French Lick, Ind. The Wildcats tied with Purdue at 20-over-par to beat the nearest competitor by 5 shots.

For the first 31 years of the Big Ten Championships, victory eluded Northwestern’s grasp as it watched seven other Big Ten teams win the event at least once.

Such thoughts will haunt the Wildcats no more.

NU captured its first Big Ten title Sunday, finishing the tournament as co-champions with Purdue, 5 shots ahead of the nearest competitor.

“We felt like we were making strides, but we hadn’t won a team tournament yet,” Fletcher said. “But this group worked incredibly hard through the winter and all spring. They really embraced getting better and played with a lot of confidence this week.”

It was evident from the start that the 32nd time might be the charm for the Cats. NU raced out to a 6-shot lead in the first round and gave little indication it would falter. The team remained steady in the second round, keeping a 5-shot cushion going into the final 18 and appeared poised to come out victorious.

Then Purdue made things a bit hairy. The No. 15 Boilermakers charged down the closing stretch and actually caught the No. 29 Cats at the finish. NU clung on just enough to remain in a tie and win a share of the Big Ten crown.

A key to that was dealing with the course’s vastly undulating greens, but the mental aspect of closing out a tournament was the main factor in producing victory.

“The grittiness the team, and especially Devon Brown, showed is an intangible that wins tournaments,” Fletcher said. “Sometimes it’s not about how good you hit it, it’s what you do when you have some bad shots and you’re not hitting it your best.”

Fletcher had good reason for such praise. Her two top young guns remained as solid as ever. Hana Lee, a sophomore, opened up the tournament with a bogey-free 68 and had the first day lead. Rounds of 80 and 77 thereafter cooled off her scintillating start, but she still finished tied for 12th.

Freshman Kaitlin Park posted her third top-10 finish of the spring, as she placed solo sixth in the event. It might have been even better if Park had not made a triple bogey on her final hole of the tournament, possibly a joint runner-up finish.

Nonetheless, the freshman is pleased with how her game has progressed.

“Mentally, I’ve gotten a lot stronger because I now really understand the team mentality,” Park said. “Having my teammates there, I’ve been able to trust my game a lot more.”

Team depth is also important in collegiate golf, and NU has it in bundles. This spring has seen a veritable game of musical chairs when it comes to which supporting cast member will step up next. Freshman Elizabeth Szokol has twice placed in the top 25,  and freshman Suchaya Tangkamolprasert put together three solid rounds of golf to register a ninth place showing at the Lady Buckeye.

Even senior Lauren Weaver who was in a massive slump for most of the season, dug out her game at the Lady Buckeye to post her highest finish in more than seven months.

These three played solid golf in French Lick, all finishing in the top 25 on the final leader board. It was the missing sixth competitor that gave NU a boost. That player, Devon Brown, went through a swing change last summer and has fought her game all season, if her shooting lower than 82 just once in her previous six competitive rounds is any indication.

In French Lick, though, the junior shattered the 82 mark all three rounds, posting scores of 74, 74 and 75 for a tie for seventh place.

Her highest finish this season by far, Brown was happy to see the long, trying retooling process finally paying dividends for her team.

“It’s been a long process. It was definitely hard the last two quarters, and I would get frustrated a lot,” Brown said. “To see it all come together and to see my teammates all on the 18th hole pulling for us to win, it was amazing, and I couldn’t have asked for anything else.”