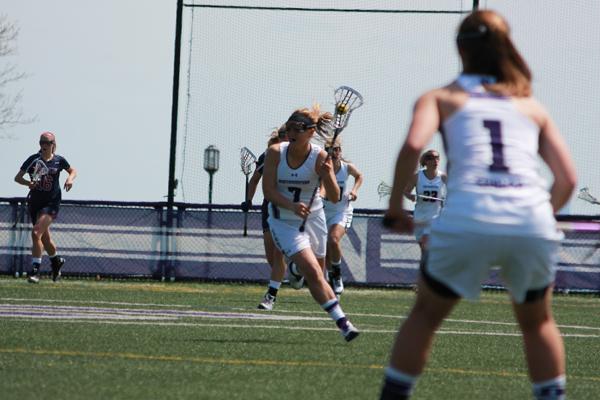 Fans and family of Northwestern players packed the stands at Lakeside Field, and more than 1,600 spectators could hardly have asked for a more perfect Saturday afternoon.

NU took a 5-1 lead just four minutes into the game in large part thanks to senior attack Erin Fitzgerald and junior midfielder Alyssa Leonard, both of whom scored twice before the 17-minute mark.

Although the Quakers were able to narrow the gap to 3 goals on two occasions, they were never able to tie the game. However, the march looked much more competitive than the scoreboard would indicate.

Draw controls did not come easily for the Cats, who won 14 compared to the Quakers’ 11, and NU frequently had to battle Penn off of the draw for possession. The Cats also battled for groundballs, picking up 11 to barely edge the Quakers, who collected 10.

Senior defender Taylor Thornton, who contributed 1 caused turnover and played defense throughout the midfield, said her team focused on coming up with the 50-50 balls leading up to the Penn contest.

“All week we’ve been working on draws and ground balls because really at the end of the day as long as you get possession, that’s what’s going to win you games,” Thornton said. “As long as we’re gritty and we come up with them, I think that’s a positive.”

The home team was able to make the most of its possessions throughout the contest – nearly five minutes of the frame had gone by and NU had already racked up 3 goals when Penn finally had their first possession. The Cats also took 28 shots compared to Penn’s 16.

Fitzgerald scored a hat trick before halftime and tallied 4 goals during the contest, pushing her season total to a team-leading 55 goals.

Junior midfielder Kelly Rich notched a hat trick as well. Although NU tends to score a lot off of its free-position shots, all 3 of Rich’s goals were assisted, and the team ended up with 6 assists on the afternoon.

But one of the team’s most exciting goals came from a somewhat unfamiliar name, senior midfielder Alexa deLyra, who scored her first goal of the season with 32 seconds left to close out the game.

Coach Kelly Amonte Hiller, who chose to start deLyra in place of junior defender Kerri Harrington, said the goal was the perfect regular-season ending for her team.

“(The goal) meant everything to the team,” Amonte Hiller said. “Alexa is such an unselfish person and such a pillar for this team. She does so much that goes unnoticed. … For her to go out there and really take advantage of her opportunity today was just awesome.”

Amonte Hiller not only spoke to the positivity the senior class brings to the team, but also noted how critical the seniors will be as leaders in the post season.

“They all have a great vibe about them,” Amonte Hiller said. “They want to do well, they’ve had ups and downs in their career so they have the experience and they know what it is to go through a battle, to go through a war, and that’s what it’s going to take down the stretch.”

As NU looks ahead to its first game in the ALC Championships in Baltimore on May 3, Amonte Hiller said her team will focus on taking small steps forward and play by her version of survive and advance.