Take Back the Night Rally attracts audience, gives a voice to issue of sexual violence 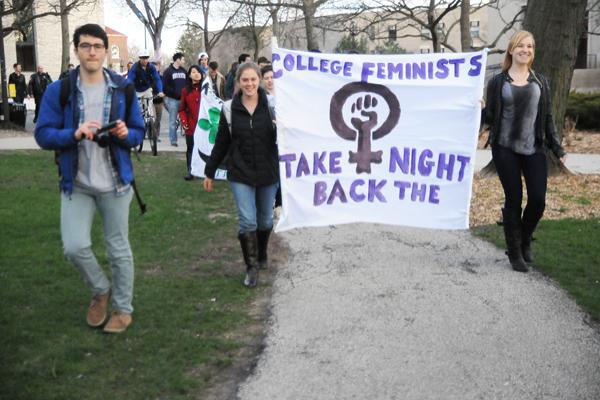 Weinberg sophomores Erin Quick (left) and Linzy Wagner (right) hold the banner during the Take Back the Night rally on Thursday. The event was held by College Feminists, Sexual Health and Assault Peer Educators, and Men Against Rape and Sexual Assault.

Members of the Northwestern community marched Thursday evening to raise awareness about sexual assault and violence against women at the Take Back the Night Rally.

“Yes means yes, no means no,” the supporters chanted as they marched through campus. “Whatever we wear, wherever we go.”

About 60 students and Health Promotion and Wellness staffers gathered at The Rock and listened to a speech about rape culture from Laura Stuart, a coordinator at the Center for Awareness, Response and Education. After demonstrating across campus , students assembled in Norris University Center’s Dittmar Gallery for a “Speak Out,” where survivors told their stories.

“No campus is immune from rape culture,” Stuart said.

The adviser of Sexual Health and Assault Peer Educators and Men Against Rape and Sexual Assault then led a game of “campus rape culture bingo,” reading out statements commonly heard on college campuses. Stuart said each item pointed out things that trivialize and normalize rape and the frequency at which it occurs. Almost every statement she read was greeted with a chorus of “bingos.”

For the organizers of the event, Take Back the Night and other events related to Sexual Assault Awareness Week, which started Monday, give students a chance to bring attention to an issue often difficult to articulate.

“For Sexual Assault Awareness Week, people are mostly looking for a shared safe space to talk about things that they have experienced and things people on campus have experienced,” Lauren Cichock, co-director of College Feminists, told The Daily earlier this week. “The week is very progress-oriented, but it is also meant to help people feel united.”

The College Feminists, as well as other sexual health groups such as SHAPE, aim to reach a broad section of the NU community. Many events put on by these groups, however, tend to attract a more narrow audience.

“One of our goals is to reach different groups on campus,” SHAPE executive director Tessa Owens told The Daily this week. “Talking about an issue as sensitive as sexual assault is very hard. It’s those kinds of events that tend to attract people who are already interested in this type of prevention work or activism.”

The Weinberg junior added that many SHAPE events tend to attract audiences similar to those that are interested in Gender Studies or are involved in the humanities.