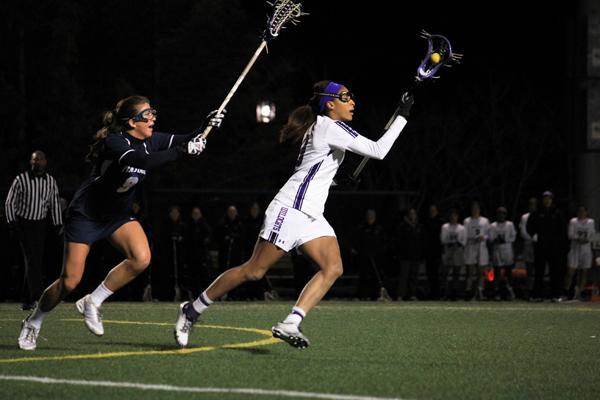 Northwestern midfielder Taylor Thornton was a critical part of the midfield, scooping up 5 ground balls. The senior also won 2 draw controls and took a shot in the Wildcats’ 10-8 win.

After a quick three-day break, Northwestern took to the field Wednesday night in South Bend, Ind., and it was back to business as usual for the Wildcats.

The good news for NU begins with the offense. The Cats racked up 18 shots, 16 of which were on goal, and had six different players score, including goals from less-experienced players in sophomore midfielder Jess Carroll and midfield freshman Kaleigh Craig, who had a goal apiece.

Junior midfielder Kat DeRonda contributed a hat trick, with one of the goals coming on a free-position opportunity.

Senior attack Erin Fitzgerald also tallied a hat trick to increase her career total to 182 goal despite the fact that Barbara Sullivan, one of the Fighting Irish’s leading defenders, guarded her for the bulk of the contest.

Although Notre Dame scored first in the third minute of the game, Fitzgerald’s first goal of the night came just one minute later.

The game was a back-and-forth contest at its beginning and end, but NU was able to assert its offensive prowess during a 25-minute stretch that included the end of the first and beginning of the second half, in which the team went on a 7-1 goal streak.

The Cats made good decisions and played an unsettled offense with confidence – NU had only 3 assists for its 10 goals – but they were not able to hold possession as effectively in South Bend as they did earlier this season against Penn State.

NU had 18 turnovers and Notre Dame had 16, but the possession changes made both team’s midfield and transition games all the more important.

And it was in the midfield where the game got chippy.

Senior defender Taylor Thornton played a critical role in the midfield Wednesday and collected 5 ground balls to come in second for the team, just behind senior midfielder Ali Cassera, who notched 6.

Draw controls were less kind to the Cats. Junior draw control specialist Alyssa Leonard won only 1 draw control for the entire evening, although both Thornton and senior midfielder Gabriella Flibotte contributed with 2 draw controls each.

Sullivan bested the Cats on the circle almost single-handedly and won 7 of Notre Dame’s 10 draw controls for the game.

In the cage, sophomore goalie Bridget Bianco bounced back from Saturday’s measly 1-save game for a career-high-tying 9 saves against Notre Dame’s aggressive attack.

This time around, the Cats showed determination and held onto their 2-goal lead by keeping the Fighting Irish from scoring for the last 11 minutes of the game, and Amonte Hiller had no complaints.

“I thought we came out with good energy and executed pretty well on defense,” Amonte Hiller said. “After that it was really just about who wanted it more, and we made the plays in the last few minutes that we needed to hold on.”