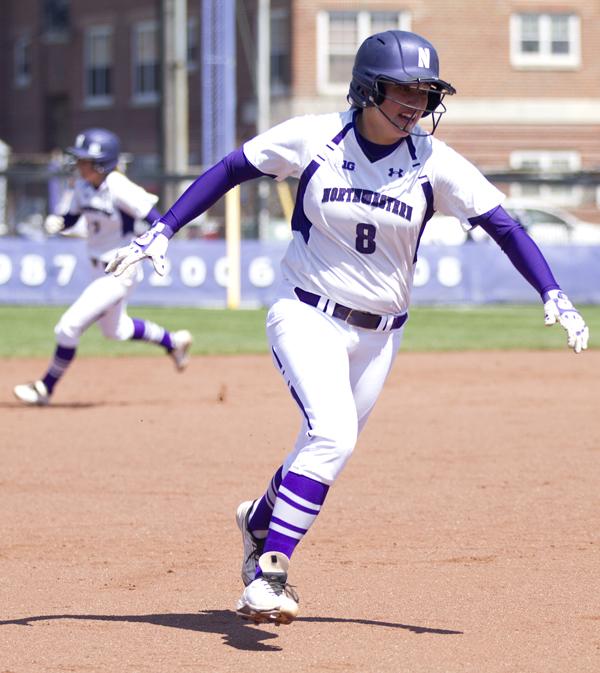 Sophomore pitcher Amy Letourneau rounds the bases. The sophomore ace has more strikeouts than any other pitcher in the Big Ten but is comfortable in the batting lineup as well – she is also tied for seventh most home runs in the conference.

As the Wildcats head into the homestretch of the season, no one has been more crucial to their success than ace sophomore Amy Letourneau.

Letourneau’s performance at the plate keeps her in the lineup regardless of whether she is on the mound that day. At first base, Letourneau does not find difficulty keeping her head in the game, even though she is used to pitching.

“I’m still 100 percent in the game and focused,” Letourneau said. “Every pitch almost feels like it’s coming out of my hand when I’m at first. That’s how much pressure I put on it and how much focus I put in it.”

Her presence on the field can help fellow pitchers when they are struggling.

“I love being on the field with my other pitchers because I know exactly what they’re going through,” Letourneau said. “Being out there, I’m able to help them settle down and go right after the batters.”

The Cats will certainly need Letourneau at the top of her game on the mound, at the plate and at first base with a double header against conference opponent University of Wisconsin on Wednesday.

The Badgers are third in the Big Ten with a 10-5 record in conference. The Cats are right behind them with a 9-5 record.

NU coach Kate Drohan recognizes the importance of winning games late in the season but also how hard it is to get those victories.

“This time of year, no game is easy,” Drohan said. “Every game is a battle. Every team has 40 or 45 games under their belt, and they’re playing well.”