Students, administrators stand together for Boston 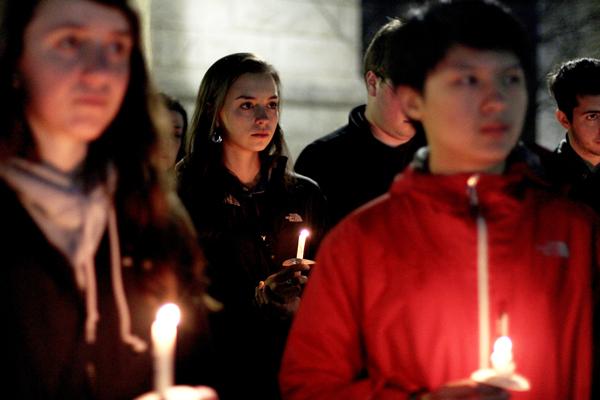 Students stand by in silent respect as leaders from Northwestern religious communities share words and prayers for the victims of the tragedy in Boston and the effect it has had on all.

The Northwestern community gathered Monday night at The Rock for a candlelight vigil to remember the victims of the Boston Marathon bombings.

“United we stand,” University Chaplain Timothy Stevens said. “Together humbly we pray, whether we are believers or non-believers, this is a time for reflection and renewed resolve, not to be defeated by fear.”

About 60 students and administrators showed up to commemorate those affected by the deadly explosions that went off near the finish line at the April 15 race.

“We were deciding whether to hold a vigil, and Cheyenne and Maddie told me, ‘We think we should do it,’” Stevens said. “They deserve credit for getting us all mobilized.”

Stuart said she and Blount wanted a venue for NU students and administrators to express their condolences for the victims in Boston.

“We know a lot of the Northwestern community has connections to Boston,” Stuart said. “It was a tragedy, but it’s also a good time for us to come together as a community.”

Richard Barbera, president of the Northwestern Triathlon Club, finished the race and was eating at a restaurant two blocks away when the bombs detonated. At least a dozen other runners from Evanston crossed the finish line before the explosions went off, according to tracking data on the marathon’s website.

Some vigil participants also had ties to the tragedy.

Weinberg freshman Mia Manavalan said her cousin runs the Boston Marathon every year but opted out this year because he was too busy with school.

“It was really lucky,” Manavalan said.

Manavalan said she texted SESP sophomore Tova Yampolsky to come with her to the vigil.

“I wanted to go because it’s a great way for the school to come together,” Yampolsky said. “Vigils at Northwestern are always super powerful. The last one I went to was for (missing McCormick sophomore) Harsha Maddula. It really makes you feel part of a community.”

Because Simon lived, married and buried his father in Boston, he said the city holds a special place in his heart.

“For me, Boston is a place of joy, a place of family and friendship, a place of love,” Simon said. “For me and for so many others, that was shattered last Monday. But not only if you’re from Boston, or if you’re a marathon runner. For all Americans, for all caring human beings, this was a shattering moment.”

Stevens told The Daily after the event that simply holding a vigil is an important part of community and coping with tragedy.

“There are all sorts of levels of courage, and this may not be the most courageous thing, but it’s important to say, ‘We don’t accept this,’” Stevens said. “I think this is what Northwestern at its best is about. We don’t have to have 100 percent of the community standing here. We are here as a community.”