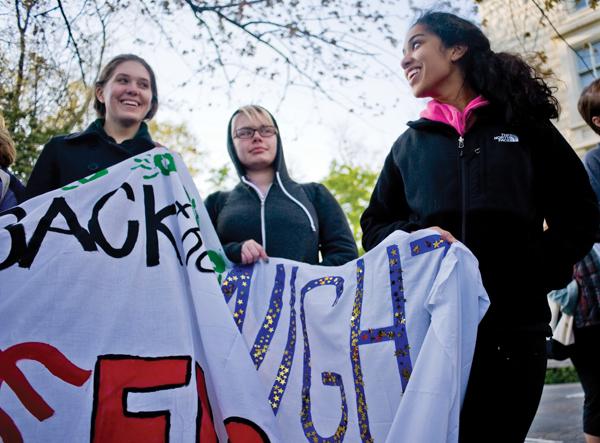 As the Northwestern College Feminists kicks off its annual Sexual Assault Awareness Week on Monday, the group will have an increased focus on political activism and involvement of the Greek community.

The week, which will feature the annual Take Back the Night rally, is part of an international effort to raise awareness of violence against women. The week will include events ranging from discussion groups to banner painting.

The events will start with a discussion Monday, titled “Girl Talk,” that focuses on relationship violence. College Feminists will also be partnering with Men Against Rape and Sexual Assault for White Ribbon Day on Wednesday. Toward the end of the week, students can attend a self-defense class, a barbecue and a documentary screening on rape.

Lauren Cichock, co-director of College Feminists, said the issues that affect women on campus today deal a lot with sexual violence and low representation in political bodies such as Associated Student Government.

“We want to focus on having women take a stand on campus with events like the Take Back the Night march,” the SESP junior said. “The event will begin with a speech at The Rock about sexual violence in the community, and then we will march around campus and try to take back a sense of safety.”

She added that College Feminists is also hoping to increase women’s involvement on campus.

“I recently talked to ASG candidates about furthering female political participation, another concern on campus,” Cichock added. “I like the idea of furthering activism by promoting a leadership track for women in ASG.”

Njoki Kamau, associate director of The Women’s Center, said some students voiced concerns about the lack of commemoration on campus for the 100th anniversary of the Women’s Suffrage Parade in Washington, D.C., in March. However, Cichock said College Feminists was not upset by the University’s limited publicity for the anniversary. She added that the organization wanted to spend its resources on more pressing concerns,  such as sexual assault.

“We have already won that battle,” she said.

Kamau said women’s suffrage was once a major issue on campus because Frances Willard, the first dean of women at Northwestern, played a significant role in the movement.

“She was a pioneer for women’s equality,” Kamau said. “She was very passionate about women getting a college education. I see her as a trailblazer.”

Kamau added that The Women’s Center and students should now look at Willard as a role model for women to continue fighting against the problems they face today.

“We are still fighting a fight,” she said. “It’s just that now we are coming from a different angle. Today it’s about the increasing amount of pressure society has placed upon women.”