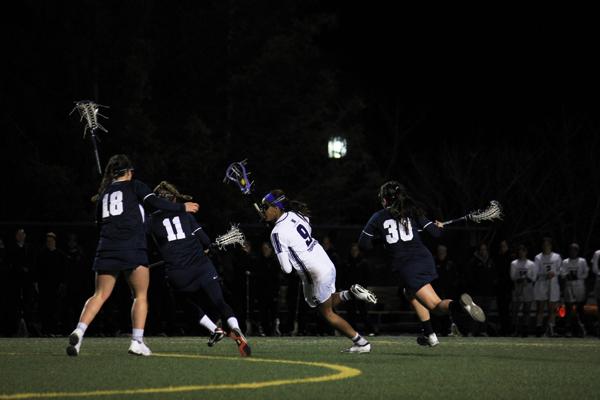 Senior Taylor Thornton carries the ball against Penn State. Florida led 5-0 on Saturday before Thornton got the Cats on the board.

In 12 years, Northwestern has never lost a game as badly as it did to Florida on Saturday.

Saturday was NU’s fourth straight loss to Florida — the last time the Cats beat the Gators was in May 2011.

“They executed really well and deserve all the credit for that,” coach Kelly Amonte Hiller said. “There’s nothing we can do about it now. We need to reevaluate ourselves and be ready for our next game.”

The problem on both ends of the field for NU was in the goal. Sophomore goalie Bridget Bianco, in her inaugural contest against Florida, had only 1 save throughout the afternoon, and the Gators had 22 goals on 28 shots.

On the other hand, the Cats recorded 18 shots to come up with only 4 goals, but Florida goalie Mikey Meagher had only 5 saves in what Florida coach Amanda O’Leary said was the team’s best effort all season.

Turnovers also killed the Cats. Although NU collected 21 ground balls to Florida’s 15, the Cats had 8 turnovers in the first half alone and won only 11 draw controls compared to the Gators’ 17.

Already struggling to settle offensively, NU was also fighting the clock, which was running continuously on mercy rule for the entire second half since Florida had an 11-goal lead going into halftime.

But well before halftime, the Gators were able to do what the Wildcats have been focusing on for much of the season – start well.

Florida’s Shannon Gilroy scored first, just 30 seconds into the contest, and teammate Gabi Wiegand scored 31 seconds after her to put the Gators up 2-0 just one minute into the game.

The home team went on to score three more times before the Cats got on the board with a free position shot from senior defender Taylor Thornton with 17:59 left in the first half.

Florida also moved the ball much better than NU did on offense.

The Gators had 11 assists for their 22 goals from 7 different goal scorers. For the Cats, only Thornton, senior attack Erin Fitzgerald and freshman Nancy Dunbar found the back of the net.

All 4 of the Cats’ goals were unassisted, and Dunbar’s goal came with 14 seconds left in the game.

NU also struggled to find a way around Florida’s defense, which kept Fitzgerald, who, after Saturday’s game, leads the Cats with 48 goals this season, to just 4 shots and 2 goals.

The Gators’ defense kept Fitzgerald away from the goal for much of the first half. Fitzgerald’s first goal was a free position with 13:24 left in the period.

Saturday’s matchup was an aggressive contest between the two ALC rivals, who played on an emotional first-ever senior day for Florida, in front of a crowd that stayed on its feet throughout the entire contest.

Although the Cats have two games left before the ALC Tournament starts May 2, the Gators have two weeks to gear up before heading to the championships in Baltimore, likely with a first-round bye.

Despite Florida’s dominant performance, O’Leary won’t count the Cats out just yet.

“That’s the one thing that makes Northwestern so special,” O’Leary told ESPN Radio after the game. “They can play games like this and regroup and come back out and turn that score back on you in a heartbeat. I expect in the ALC Tournament we’re going to see a totally different team.”