Lacrosse: Northwestern gears up for marquee matchup against Florida 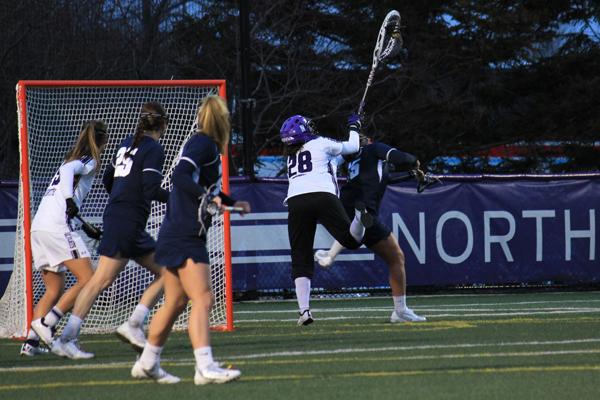 In her first season as a starter, Northwestern goalie Bridget Bianco has led the Cats to a 13-1 record with a .497 save percentage.

In the past year, Northwestern has racked up more than a few impressive accolades.

The Wildcats won the national championship in May. Senior defender Taylor Thornton won four of women’s lacrosse’s highest honors, four former Wildcats were selected to be a part of the U.S. National Team, the Intercollegiate Women’s Lacrosse Coaches Association named four NU players as members of the first-team for the All-West Region. To top it all off, coach Kelly Amonte Hiller was inducted into the U.S. Lacrosse Hall of Fame.

The ALC conference foes have a storied rivalry; the Gators lead the all-time series with the Cats 3-2, despite graduating their first-ever recruiting class at the end of this season.

Florida was also the first team to take the ALC Championship title from NU, who won the title from 2007 to 2011.

Now, the Cats travel to Gainesville, Fla., with an 11-game winning streak on the line to contend with the Gators and their prolific offense, which boasts the third-ranked scoring offense in the nation and six players with at least 20 goals, three of whom have at least 35 goals.

Offensive statistics aside, Amonte Hiller said the Gators are more well-balanced and experienced than the stats sheets indicate.

“They have a lot of veterans … and they just have a lot of people that have been intact,” Amonte Hiller said. “They know each other, know how each other plays, feed off each other well and they have tremendous athletes. Their coach … is a tremendous coach and a great defensive coach, too, so I would say their team is very well balanced.”

Bianco has a .497 save percentage this season and tied her career-best with 9 saves against Stanford last time out.

The sophomore is also a crucial figure in the Cats’ signature staunch defense that also depends on Harrington, Thornton and senior Gabriella Flibotte for leadership.

“Bridget makes such clutch saves that I have no doubt in my mind that I can go … pressure way out,” Harrington said. “If I get beat, I have complete confidence that Bridget’s going to shut her down. She makes incredible saves — we joke about it, but she will save the ball with her toe.”

In addition to Bianco’s dependable goaltending, NU’s defense has been firing on all cylinders of late.

The Cats’ defense held No. 8 Penn State to only 10 shots when they met earlier this month, and held No. 9 Duke to 14 shots on Friday.

Flibotte contributes to the defense most notably with ground balls. The senior leads the team with 39 ground balls and has also forced 33 turnovers this season, the fourth-highest total for a single season in program history.

Amonte Hiller said the contest’s proximity to the ALC Championships in May and the fact that the contest is Florida’s senior game will not change NU’s game plan, but she did not deny the game will be a special one.

“Anytime you have a rivalry with a team, you know, it adds more emotion to the game,” Amonte Hiller said. “They’re obviously a tremendous team, and so it’s a great game. It’s what you play for — the opportunity to play in games like this.”