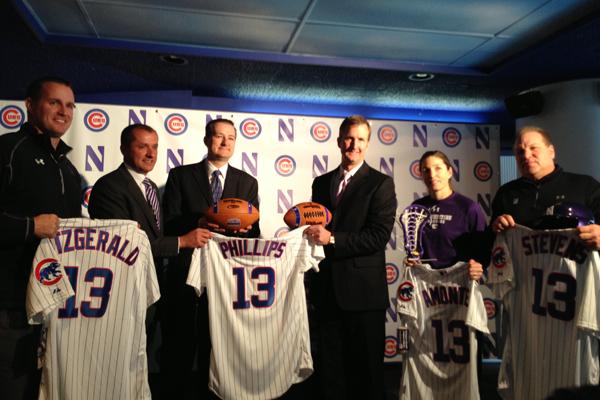 When Northwestern coach Paul Stevens learned of athletic department plans for his team to play at Wrigley Field, his reaction, he said, was almost cartoonish.

“It was kind of back to a time when cartoons used to have these things that went, ‘WOW!’” he said, practically screaming the last word and accelerating the booming yell through the rest of the sentence. “And there was a big W-O-W on the screen, and it was all illuminated.”

“That’s kind of what I thought,” he added.

The series has serious implications for NU’s Big Ten Tournament hopes. No one seems to view Saturday as just another game.

“It’s definitely a game we’ve had circled on a calendar for a while,” senior first baseman Jack Havey said. “(I) grew up on the North Side, so (I’m) definitely a huge Cubs fan, as hard as that can be at times. So that makes it even more exciting.”

In February, NU and the Cubs announced a pact for Wrigley Field to host several Cats home games in football, baseball and other sports through 2017. Saturday’s contest will be the first event of the agreement.

“Wrigley is a phenomenal opportunity.” Stevens said. “What an opportunity for our guys to play in a place that is so special, not only if you’re from this city but if you’re not. And our guys are extremely excited about having the opportunity to go there and play.”

Playing at Chicago’s most iconic sporting venue reinforces the Cats’ athletic department’s commitment to be “Chicago’s Big Ten Team,” as does the composition of NU’s roster. Of the Cats’ 30 current players, 13 went to high school in Illinois, many of them in the Chicago suburbs.

The NU starting pitcher who will take the Wrigley mound is not from the Chicago area, but he is no stranger to big league ballparks. Senior Luke Farrell’s father, John, played for three teams in an eight-year major league career and now manages the Boston Red Sox.But when Luke throws his first pitch Saturday, he will have done something John never did: pitch at Wrigley Field.

Amid the excitement of the venue, NU has a game to play. A week after being swept by Minnesota, the Cats are tied for eighth place in the Big Ten and need strong results in their final 12 conference games to reach the top six and qualify for the Big Ten Tournament. Michigan has won 10 straight games and is tied with the Golden Gophers for first in the conference, but Stevens says the occasion of playing at Wrigley is not distracting from the task at hand.