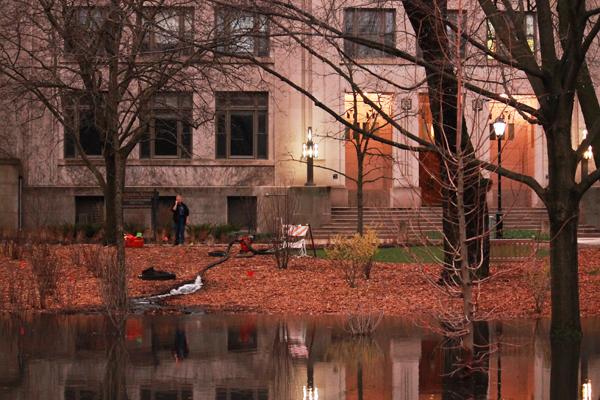 No residents needed to be moved, and Cubbage said no classes were relocated due to the storm.

The Sports Pavilion and Aquatics Center as well as Willard dining hall were shut down Thursday due to basement flooding. Passengers on the Intercampus Shuttle were told to expect 45-minute delays.

Beyond Northwestern, public works crews were working to address flooding in basements, streets and alleys across Evanston.

As of 11:30 a.m. Thursday, crews received more than 80 complaints of basement flooding and at least 50 more on street and alley flooding, utilities director Dave Stoneback said in a conference call. The incidents were scattered  around Evanston, he said.

A west Evanston outage near the intersection of Crawford Avenue and Simpson Street affecting 11 customers is scheduled to be resolved by 5 a.m. Friday.

After the heavy rainfall, crews were still responding to storm-related issues well into the afternoon.

A 6-foot diameter portion of pavement near the Evanston-Chicago border collapsed under the rear of a furniture truck.

The hole developed at about 2 p.m. near the intersection of Dobson Street and Custer Avenue, fire division chief Dwight Hohl said.

The seasonal rains likely caused the pavement to collapse, exposing an empty space under the asphalt, he said. City workers poured gravel into the hole to support and remove the truck, which was towed away.

Thursday’s storms not only put outdoor city employees to work but also staffers managing the city’s 311 service. The service received more than twice as many calls by 11:30 a.m. Thursday than it usually gets in a 12-hour weekday, said Erika Storlie, the city’s citizen engagement manager.

Back on campus, Cubbage said University facilities management had no estimate of when water removal requests would be completed.

“On the whole we’re in pretty good shape,” Cubbage said.