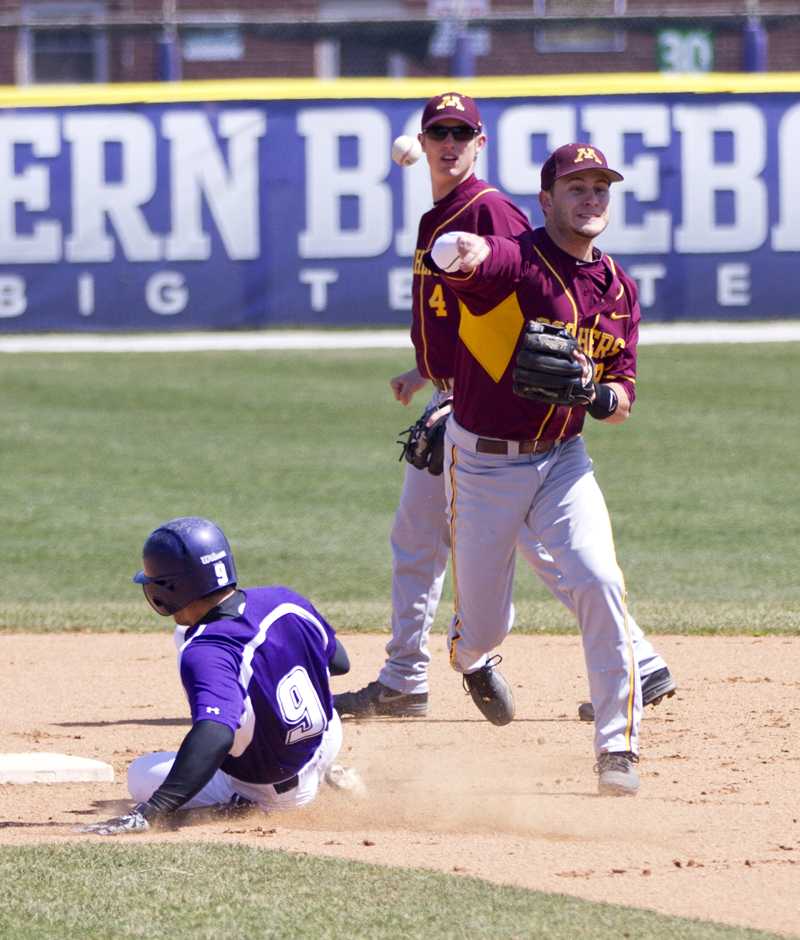 The junior second baseman sustained his torrid hitting Tuesday and went 2-for-3 with 3 RBIs as the designated hitter as Northwestern (15-13) defeated Wheaton College (8-18) 6-0 at Rocky Miller Park.

After another big performance at the plate, Ruchim, hitting .418 with 13 extra-base hits on the season, tops the Cats in batting average, hits, home runs, doubles, triples, total bases, slugging percentage and on-base percentage. He is second in runs scored, walks and stolen bases and tied for second in RBIs. He has been, unquestionably, the team’s best offensive player.

On Tuesday, Ruchim singled in the first inning and scored the game’s first run two batters later. Then in the fourth, with the bases loaded and a run already home in the inning, the junior rapped a line drive to the right-center-field gap. Wheaton center fielder Josh Kimmel couldn’t reach the fly in time, and by the time he chased the ball down and returned it to the infield, three runners had scored and Ruchim stood on third base with an easy triple.

“Fastball, kind of middle of the plate,” the junior said of the pitch. “I think he was maybe trying to go away with it and just kind of missed a little bit over the plate. I was thinking up the middle, drive something to center field and was fortunate enough to get a good fastball to hit.”

With ample run support, NU freshman Matt Portland turned in his best pitching performance to date. The lefty allowed only 2 hits and 2 walks and struck out eight Wheaton batters over seven dominant innings. The outing, Portland’s fourth start of the season, lowered his ERA to 2.55 and brought his season strikeout total nearly even with his inning total 17 and 17 2/3, respectively.

“This has been the best I’ve pitched this year,” he said. “My fastball and my slider were working well today. By just throwing fastballs and throwing strikes with the fastball, that makes the slider much more effective.”

With a comfortable lead over a non-conference opponent, coach Paul Stevens extended playing time to several players lacking in experience. The Cats batted two seldom-used pinch-hitters in the eighth inning and sent freshman Evan Schreiber to the mound for the final two innings. The freshman threw two scoreless innings in his first career appearance.

“I’m thrilled that Evan Schreiber got in today,” Stevens said. “There’s a guy that’s got one of the best changeups I’ve seen. You sit there and it walks up there and hits a brick wall and it just falls off the table. I’m glad to see he got an opportunity to get out there.”

Senior Colby Everett contributed 2 hits, scored a run in the fourth and drove home NU’s final run in the fifth. After a slow start to the season, the slick-fielding third baseman has upped his average to a respectable .250, while providing strong defense at the hot corner.

The Cats play again Wednesday, facing Western Michigan (12-23). Ruchim says there’s no secret to his success — he will be ready to play and likely ready to hit.

“What’s important, no matter what the circumstance is, when you’re feeling good (or) feeling bad, you’ve go to keep the same mindset, same preparation,” he said. “Go out there and do your best. If things happen, they happen.”