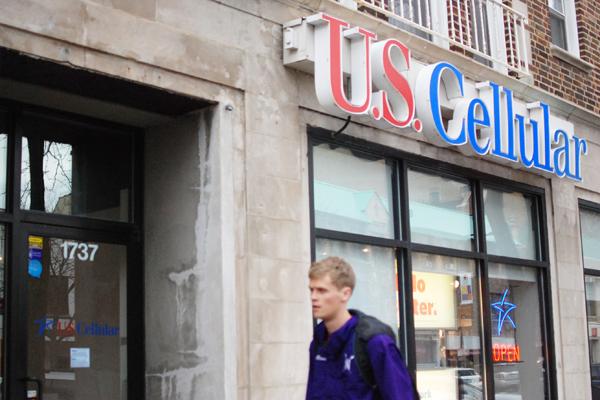 U.S. Cellular is planning to close its downtown Evanston location in the coming weeks as the company plans to focus its marketing efforts to rural areas.

The U.S. Cellular store in downtown Evanston will close in the next few weeks after more than a decade in business.

The Chicago-based company will cut six jobs with the store’s closure at 1737 Sherman Ave. as it shifts marketing efforts from commercial hubs such as Chicago and St. Louis to rural areas, spokeswoman Kelly Harfoot said. U.S. Cellular announced in November its plan to nix more than 600 jobs in the Chicago area as it turns over 585,000 customers to Sprint Nextel.

David Apont, who has worked at the downtown Evanston store since last fall, is one of the employees who will lose their jobs.

“There is no stability, but I guess U.S. Cellular went about it pretty decently. They told everybody we didn’t have time,” said Apont, who plans to look for another sales job.

The cell phone company will sell its operations in its core markets for $480 million to Sprint Nextel and close 67 stores in the Chicago area. The company said customers will not be affected by the transition.

“The sale is part of our business strategy to increase focus on markets where we have a strong position,” Harfoot wrote in an email.

The store is closing under financial pressure as competitors such as AT&T expand cell phone coverage. U.S. Cellular lost $21.1 million in service revenue in the fourth quarter of 2012 compared to the same period in 2011.

Apont said ever since he began working at the Evanston store, business had been slow, with customers shopping at other major cell phone retailers in the downtown area, such as T-Mobile across the street.

The company will continue to provide services in Illinois cities including Rockford, Peoria and Quincy as it moves away from commercial hubs.

“Exiting these markets lets us get stronger by initially getting smaller,” Harfoot said in the email. “We will focus on our stronger markets and grow from the strength of that base.”

U.S. Cellular moved to the location on Sherman Avenue in 2002, replacing part of a textbook store called Student Book Exchange.

Paul Zalmezak, the city’s economic development coordinator, said he thinks the space will be leased out again soon.

“Sherman is our strongest retail street on downtown Evanston,” Zalmezak said. “I’m very confident the space will fill up quickly once it goes on the market.”