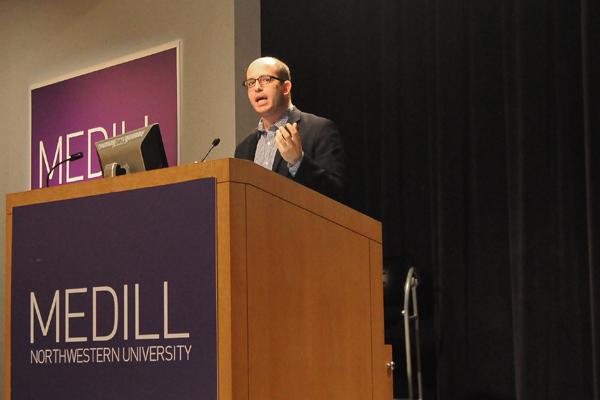 Brian Stelter, a media reporter for The New York Times, spoke during the first day of Media Rewired, a new conference on online journalism organized by the Medill Undergraduate Student Advisory Council.

Two wunderkinds of the media industry on Saturday offered an optimistic outlook for journalism’s future and where Medill students fit into that puzzle.

“It’s scary, it’s uncertain, you may not make the money you want to make right off the bat,” said Dan Fletcher (Medill ’09), former Facebook managing editor. “But in terms of opportunity for things for you to do and the ways for you to implement your ideas — I really do mean this — I doubt there’s a better time.”

Fletcher and Brian Stelter, a media reporter for The New York Times, book-ended the first day of Media Rewired, the inaugural conference on online journalism organized by the Medill Undergraduate Student Advisory Council. The self-billed “digital storytelling summit” featured seven workshops in addition to the two speakers Saturday and a showcase of Adobe’s latest software for Web developers Sunday.

More than 400 tickets were reserved for the weekend’s events, and dozens of Medill students and faculty members filled the McCormick Tribune Center Forum for Stelter’s and Fletcher’s speeches.

MUSAC executive co-chair Kimberly Lee said the organization came up with the idea for the conference because it was “concerned about media’s changing landscape” and wanted to present some viewpoints that may not surface in a traditional classroom setting.

Stelter, who joined The Times in 2007 after editing a must-read blog for television news insiders, described the current state of journalism as a “choose-your-own-adventure model” in which aspiring reporters have more outlets than ever.

“The goal nowadays isn’t necessarily to get to The New York Times,” Stelter said. “The goal should be to get an audience some way, somehow.”

After his talk, Stelter told The Daily journalism schools like Medill still matter, even as more reporters seek less conventional methods of promoting their content and themselves.

Fletcher was also vocal about more entrepreneurship among young journalists, attributing his high-profile stints spearheading social media policy at Time magazine and Bloomberg News to being “pretty good at sticking my hand up and trying new things.” He left Facebook this month to work on his own projects, a move he described as reflective of the media industry’s rapid pace of development.

“The Internet is changing everything journalism is, and we need to react to it,” Fletcher said.

Medill junior Tyler Fisher, who taught a workshop about coding basics, stressed to his attendees that young journalists have to be fluent in the nuts and bolts of digital storytelling.

“It’s more than just increasing your job prospects, even though that’s a benefit,” Fisher told The Daily. “You can’t understand what you’re doing on the Web unless you understand how it works.”

Lee, a Medill senior, said MUSAC hopes to bring back Media Rewired next academic year but is waiting on attendee feedback to plan the specifics.