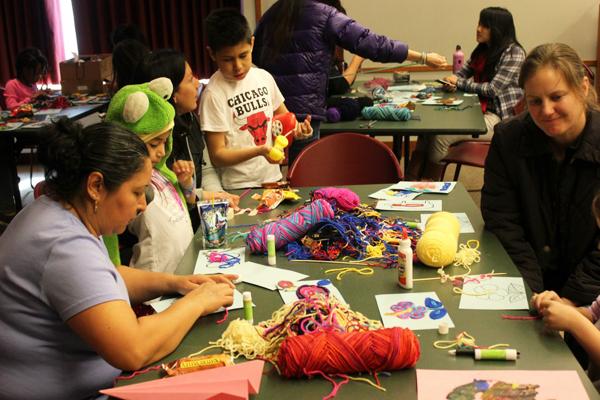 The city has made efforts to reach out to Evanston's growing Latino population. Above, children and parents participate in an event in honor of Latino activist Cesar Chavez at the Evanston Public Library on Saturday.

On a Saturday afternoon at the Evanston Public Library, scientist Isabel Carrera was explaining in Spanish how plants receive nutrients to a group of 10 children and their parents. Afterward, she handed the children plastic bags with seeds that she said would grow into plants with the right care.

“Science applies to basically everything, which is why it’s important to learn it,” Carrera, a Mexican researcher, told the children. “Keep notes on how your plant grows, and let me know next time how it’s going.”

Jugando Con la Ciencia is a weekly program at the library’s main branch, 1703 Orrington Ave., and just one example of how the city has sought to connect with Evanston’s growing Latino population.

Latinos now represent 9 percent of residents, up from 6 percent in 2000 and 3 percent in 1990, although those numbers may be underreported due to the citizenship status of some residents.

Earlier this week, Elena Garcia Ansani narrowly lost her bid to become the first Latina on the Evanston Township High School District 202 school board. Ansani’s campaign was based on addressing Latino issues, reflecting recent growth in Latino student population, which has more than doubled since 2000 to 16 percent of the student body.

Carrera and the library’s Latino outreach specialist, Daylily Alvarez, started the interactive science program in February as an effort to encourage bilingual children to take an interest in science and encourage more Latino families to come to the library.

“The city and the library have noticed that the Latino population is increasing, so we’ve been getting more books and programming in an effort to reach out to Latino families,” said Alvarez, whose position was created last year. “There’s no better place to get enthused with science on a Saturday afternoon.”

Last year, the City Council resolved to provide more services to the Latino community as one of its goals for 2013. Adelita Hernandez, one of the city’s citizen engagement coordinators, has led the charge in bringing cultural programming and increasing bilingual resources for Latinos.

Hernandez (WCAS ’05) has worked for Evanston since graduation. She recently created the Spanish section of the city’s website and a Facebook page called “Evanston en Español.”“We’re trying to reach out to Latino and bilingual families in Evanston and neighboring areas through online outreach and person-to-person contact,” Hernandez said.

“In Evanston we talk about celebrating our diversity, and this is a marvelous example,” Tisdahl said in a speech at the event.

Hernandez also coordinated a visit last month from the Mexican consulate at the Lorraine H. Morton Civic Center. About 900 people attended the four-day event, which allowed participants to apply for Mexican passports and Mexican matriculate cards. The city has recognized the matriculate cards as proof of identity since 2004.

Most of the Latino population is concentrated in southwest and west Evanston, according to 2010 census data.

Ald. Delores Holmes (5th) said there’s been a steady increase of Latinos in her ward over the past decade. She said she has always tried to have a translator at her ward meetings and produce newsletters in both English and Spanish.

“If you make this type of effort, you make them feel as welcome as you’d like,” Holmes said. “You need to understand the family values and culture, but they have to participate too, because it’s a two-way street.”

Rosa Villasenor and her family moved to Evanston from California five years ago. Villasenor is a member of the Latino Advisory Committee for parents at ETHS, where she has two sons. She said she thinks the school and the city have done a good job reaching out to Latinos and helping her get involved with her childrens’ education, although she’s heard from other parents that there weren’t many resources, such as translators or Spanish-language materials, a few years ago.

“I like where we live now, and I feel there’s been good support in the school and city,” she said. “Now it’s up to us parents to do our part and get involved.”

ETHS social worker Aracely Canchola has been pivotal in helping the high school meet the needs of Latino families. Canchola, a former Latino outreach specialist for the city, now leads ETHS’ Latino QUEST, a weekly after-school program. She also lobbied the school to hire a bilingual Latino parent liaison a few years ago.

“When Latino parents know you and connect with you, and you speak the language, they’ll ask for the help they need,” Canchola said. “It’s all about the personal relationships.”

Canchola recalled being called on often to translate for other departments during her early years working for the city and later for ETHS when there was no one else who spoke Spanish. She said although the city and community groups have made major strides in reaching out to Latinos, some don’t think these efforts are necessary.

“There’s a part of Evanston that still see things in black and white,” Canchola said. “And that’s the sad part … There are cultural things that as a Latina I understand. Sometimes people say it doesn’t matter, and I say, yes it does matter.”