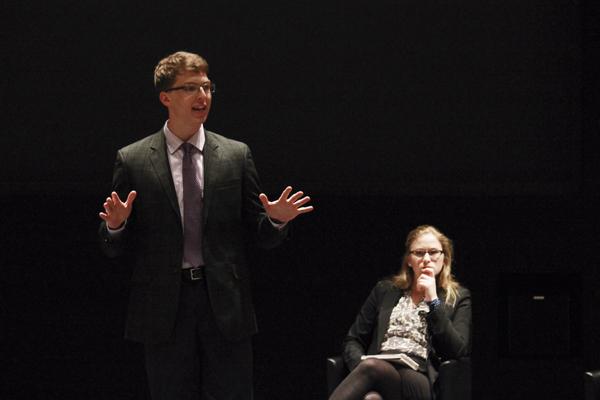 Flagler, an ASG Senator, emphasized student involvement and outreach repeatedly throughout the debate. He said his top priority would be a large-scale outreach effort to student groups and hall governments to “make ASG a much more student-driven organization.”

“One thing that we’re all going to collaborate on together is reaching out to students as much as we can,” Flagler said. “And then working on students’ ideas that students propose as much as we possibly can rather than having a top-down model possibly where we work on the initiatives that we want to work on.”

Communication between ASG and the administration was one of Kottenstette’s main talking points. She highlighted her experience, speaking about her many connections with administrators and willingness to discuss and re-adjust project ideas with them.

“It’s always going to be a big issue because we’re a university and that’s an integral part of our culture here,” Flagler said. “The biggest thing that we’re going to do with alcohol policy over the course of the next school year is fostering a stronger dialogue between ASG, the students and also with the administration so we can have greater transparency in talking about this.”

He shared an experience of calling an ambulance for a friend and being unsure of whether he would get in trouble for it.

Kottenstette agreed that “no one knows for sure where the lines are” in alcohol policy and said she wanted to “redefine the way students look at alcohol policy.”

She emphasized the need for the discussion about alcohol to go beyond Wildcat Welcome and brought up the idea of using third-party risk management groups to keep students safe at parties.

The debate closed with a lightning round, during which Kottenstette and Flagler were asked to compliment each other onstage.

ASG members in the audience reacted positively to the debate.

“I think it was a debate that was very much focused on the future and ways to make ASG better,” said ASG Speaker and Weinberg junior Katie Funderburg. “I think that’s the best way a debate can go.”