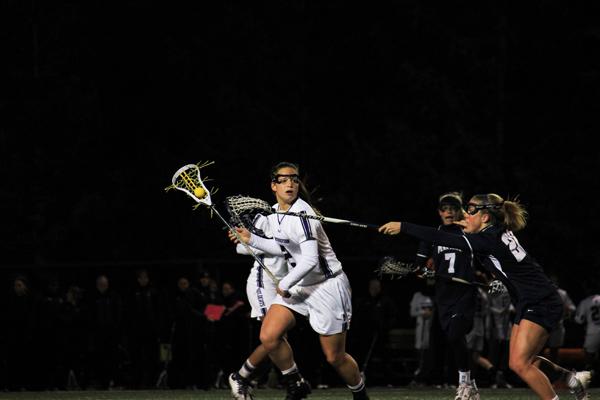 Northwestern midfielder Alyssa Leonard is four draw controls shy of the school record for draw controls in her career. The junior has 83 draw controls this season and also is second on the team with 22 goals this

Northwestern is used to ending up No. 1. What it needs to do as it heads into a weekend double-header against Duke and Stanford is start there.

The Wildcats have trailed at halftime in three of their past four games, against Ohio State, Syracuse and, most recently, Virginia. Although NU staged second-half comebacks and won all three contests, junior midfielder and draw control specialist Alyssa Leonard said it is time for her team to start off on the right foot.

For the Cats, that critical momentum starts with winning draws, which are crucial because they allow the team to play offense at its own pace and ultimately dominate possession, like NU did against Penn State last Friday.

Against the Nittany Lions, whom the Cats beat handily 11-3, NU won 10 draws compared to Penn State’s 6.

Coach Kelly Amonte Hiller attributed her team’s ability to rob their opponents of victory late in the game to their second-half draw controls — the Cats came back to win more draws than both the Buckeyes and the Cavaliers in their respective second halves, and tied draw control wins with the Orange.

“In order to score goals you have to have possession, so you have to get the draw controls,” Amonte Hiller said. “We really zeroed in on that, talked about that at halftime, and I think that we really came up with some draw controls in the second half.”

Both the Blue Devils, whom the Cats have beat 10 times out of 12 previous matchups, and the Cardinal favor first halves. Both teams have scored more goals and taken more shots in the first halves of games this season.

First halves are also decisive for NU’s two weekend opponents — Stanford led at halftime during eight of their nine wins this season, but trailed at the half in two of their three losses, and Duke led its opponents at halftime in all nine of its wins and was either behind or tied at half in all of its losses.

Amonte Hiller mentioned that Virginia’s game had an added level of difficulty due to the nature of NU’s schedule — she said playing a Sunday away game is a tough turnaround to deal with after playing at home Friday night — and said the Cats’ ability to fight back during the second half showed their resilience and poise.

Still, NU welcomes the chance to take on its next two top-20 teams on home turf. While the Cats are not yet thinking about Stanford, Amonte Hiller said she is looking forward to battling Duke, who will be out for blood after losing to unranked Boston College on Saturday.

Against Duke, winning draw controls will have an added importance.

Leonard will have the chance to make program history Friday night. She has 83 draw controls this season and 264 for her career, which makes her just 4 draw controls short of Kristen Kjellman’s (2004-2007) school record of 268.

Records aside, Amonte Hiller stressed how paramount getting possession off of the first whistle will be this weekend.

“Duke is a great team, they’re coming off of a tough loss against BC – they’re going to be ready,” Amonte Hiller said. “Draw controls, possession, it’s so crucial.”