Men’s Tennis: Wildcats return home looking to get back on track 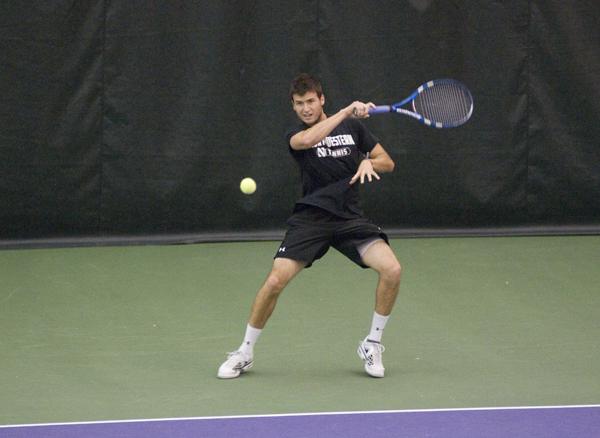 Northwestern's Chris Jackman has the best Big Ten singles record at 6-1. His only loss came last weekend when he lost in three sets to Michigan's Alex Buzzi.

An unsuccessful weekend on the road left Northwestern with a losing record in the Big Ten for the first time since its loss to Illinois in the first conference match of the season.

Although doubles has continued to be a weak spot for the Wildcats, who have dropped the first point of the match in seven of their last nine matches, coach Arvid Swan said he is confident in the progress the team is making, even if that hasn’t translated to wins yet.

“Michigan State played a good match, first of all,” Swan said. “We, after that match, decided to just try three different, new teams against Michigan. I actually thought we made a lot of progress. We didn’t win the doubles point against Michigan, but I thought with the energy and our aggressive play we made an improvement from the Michigan State match to the Michigan match.”

As a result of its doubles tribulations, NU has had to rely on singles results to help make up the difference. Anchoring the No. 6 spot, senior Chris Jackman owns the best conference singles record on the team, with his first and only loss coming against Michigan on Sunday in a tough three-setter that came down to a tiebreaker in the final set.

“Obviously it was a lot nicer to win, but I think you just have to take it for what it is,” Jackman said. “You have to realize that you can’t change the outcome, and, at the end of the day, if you put in your best effort, you’ve just got to shake the other guy’s hand, and the only thing you can do is get ready for the next match.”

First up for NU this weekend will be Penn State, against whom it holds a 20-4 record and has won its previous four meetings.

Sunday’s match will feature the Big Ten’s toughest test when No. 5 Ohio State comes to Evanston. The Buckeyes’ last loss to the Cats came in 2005 with a 5-2 defeat.

However, in the 2012 meeting between the two teams, junior Spencer Wolf and senior Josh Graves upset the No. 1 doubles team in the country of Chase Buchanan and Blaz Rola, who would go on to win the NCAA Division I doubles title that season.

“Last year they were extremely deep so we were pretty happy to get the doubles point,” Wolf said. “They have a good coach who recruits very well, and players get a lot better when they’re there.”

But the key, Jackman said, is what goes on between the ears.