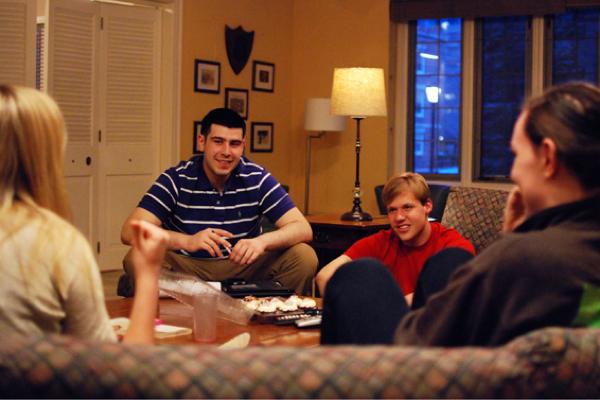 ASG presidential election running mates Aaron Zelikovich and Henry Brooke host a "cake talk" with Kappa Delta sorority. The Weinberg juniors said they are focussing on actively reaching out to many student groups in their campaign.

Aaron Zelikovich and Henry Brooke said they do not have a written platform yet, but it is not because they are behind on the 2013 Associated Student Government presidential elections.

The candidates, both Weinberg juniors, launched their campaign website Monday. It includes a forum for students to submit requests and optional solutions for the campaign. Zelikovich and Brooke said the website has garnered about 50 submissions so far with requests pertaining to mental health, alcohol policy and athletic facilities. They said they will formally write and release a platform Friday based on student submissions.

“We’ve addressed all these issues ourselves, but we just wanted to make sure we were in line with the student body,” Brooke said.

The student submissions are part of the team’s larger push to make ASG focus more on its student constituents. The candidates said they have met with about 15 student groups, asking their ideas and “putting a face to ASG,” Zelikovich said.

“Everyone on ASG knows each other,” Zelikovich said. “We want to break the ASG bubble and go out to the different groups and get everyone involved. We aren’t sitting back and waiting for the students to come to us.”

“You don’t ask a girl to prom via text,” Brooke added.

Zelikovich and Brooke said face-to-face meetings with students will continue beyond their campaign and into the year. As part of ASG executive officer office hours held in Norris University Center, the team will request the officers devote an hour to an athletic event or a student group event, along with an hour to Norris. At the executive board meetings, Zelikovich and Brooke said they want each executive member to highlight individuals they met with during the week. Even with Campus Voice in place, they said they still feel this face-to-face interaction should be their most important way of gauging student opinion.

“We love NU, we think ASG is important, but our passion is about helping people, and at the end of the day, ASG is here to serve people, and that’s what sets us apart,” Zelikovich said. “We feel the best way to do it is through face-to-face interaction. There’s no reason not to have Campus Voice. But for us, I don’t want us relying on Campus Voice. It shouldn’t be a primary method of communication.”

Zelikovich and Brooke also have their own goals in mind, which they believe are realistic and feasible.  These include focusing on medical amnesty in the alcohol policy and adding a shuttle stop in the sorority quad. Since serving as Greek Caucus whip his sophomore year, Zelikovich said he has aimed to increase safety in the sorority quad. While addressing longer-term projects, such as the construction of the new student center, the team said it would keep the more immediate goals of current students in mind.

The pair is not without experience. Zelikovich was a student group senator his freshman year and Interfraternity Council senator and Greek Caucus whip his sophomore year. He is also a member of Men Against Rape and Sexual Assault. He served on the NU Hillel and Tannenbaum Chabad House executive boards. He is also a tour guide, a member of Alpha Epsilon Pi and part of the Sodexo Student Board of Directors. His experience with Sodexo makes his plans for dining improvements on campus feasible, Zelikovich said.

Zelikovich said he took this year off from being an ASG member to assess how ASG fares with the rest of the student body. Based on hearing “ASG doesn’t do anything,” he decided to run and change ASG’s focus.

Brooke has served on the Community Relations Committee, the Rules Committee and the Election Commission. He is a member of Sigma Alpha Epsilon and played men’s varsity baseball for two years. He said his personal goal is to better accommodate student athletes who miss class for travel.

Maddie Kriger, the team’s campaign manager and a Medill sophomore, highlighted the team’s emphasis on individual student needs. On their website, students have created personal profile pictures that resemble Periodic Table elements as a way to support the campaign.

“There’s a lot to say in the tone of the campaign,” Kriger said. “They are here to make people happy.”