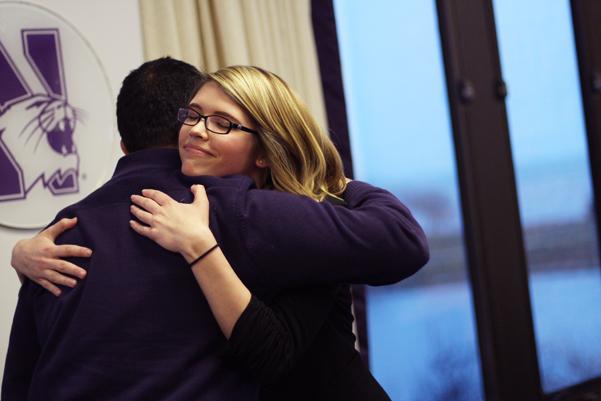 ASG outgoing Speaker Ani Ajith hugs his successor after delivering his final remarks in the position at Wednesday's meeting. Ajith told the ASG Senate to remember the power of their voice.

Katie Funderburg, a Weinberg junior, ran the last meeting with the current executive board before the April 19 elections. The Senate voted new students in for the election and the rules commissions and passed legislation supporting a new crosswalk.

Former Speaker Ani Ajith opened the meeting with his closing statement to the Senate.

“I spent only one week on this campus without being a member of the Senate or the leadership team,” the Weinberg junior said. “Your ability to effect positive change is limited only by the extent of your voice.”

Coley’s proponents noted his history with ASG and knowledge of the complex election rules. Because the date is quickly approaching, multiple senators stressed the need for experience to sort through infractions that have already occurred and handle punishments appropriately.

When asked how familiar he was with election guidelines, Coley replied, “I wrote them.”

The rules commission went to a white ballot vote, so all three candidates were automatically elected for the year-long position. Finally, Communication junior Dave Richards was elected to a one-quarter term on the rules commission.

After the votes, McCormick sophomore Alex Lower presented legislation supporting the construction of a new crosswalk on the east side of Hinman Avenue, crossing Sheridan Road. The current crosswalk is on the west side, and Lower said students dangerously jaywalk across the road.

He also said a new crosswalk would improve safety and convenience for tour groups going to the Office of Undergraduate Admissions and those walking to the Center for Civic Engagement, both of which are located on the east side of Hinman Avenue.

“I want to ask Northwestern and Evanston to cooperate in constructing a crosswalk,” Lower said.

The legislation does not include a funding allotment for a new crosswalk, but rather sends a message to University and Evanston officials that students want a change, Lower said.

During the meeting, Tony Kirchmeier, the director of off-campus life, introduced a website to better aid students’ housing search. NU joined 119 other schools nationally that partner with Places4Students.com, a site showing rentals, sublets and roommate profiles.

The company began marketing the site several weeks ago, said Mark Taylor, the site’s director of accounts. As of Wednesday night, the site listed 32 properties and five graduate students looking for roommates. Kirchmeier said the roommate profile function was particularly important because many graduate students need help trying to share their lease.