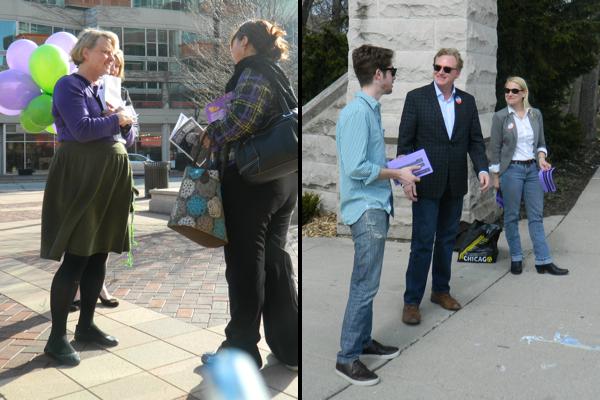 Ald. Judy Fiske (1st) and challenger Edward Tivador (right) greet Evanston residents in their ward on the last full day of the campaign. Voters will decide on the new alderman Tuesday.

The heated race for 1st Ward alderman entered its homestretch Monday as incumbent Judy Fiske doubled down on her long-simmering criticism of challenger Ed Tivador’s ability to balance two leadership posts if elected.

Hitting the streets for an 11th-hour effort to turn out the vote, both candidates stopped short of declaring victory with Tuesday’s election on the horizon.

“I will wait and see,” Fiske said as she passed out campaign flyers in downtown Evanston. “It’s Election Day, so you never know what’s going to happen.”

During an afternoon swing through the Northwestern campus to sample Frontera Fresco and shake hands at The Arch, Tivador was cautiously optimistic.

In a news release hours later, Tivador’s campaign was more bullish on its chances to unseat Fiske, comparing its early voting push to that of “President Obama’s re-election team.” Tivador said his team turned out twice as many early voters than Fiske, knocking on 4,000 doors and making 2,000 calls by the eve of Election Day.

“It will be close, and that’s why students need to vote,” Monacelli said. “My perception is that the student vote will make or break the election.”

On Monday, Fiske ramped up her questioning of whether Tivador could serve as both 1st Ward aldermen and superintendent of of Northbrook/Glenview School District 30. Fiske said she learned through a Freedom of Information Act request that Tivador’s employment contract requires him to devote his “entire time, attention and energy” to the district.

The line of attack echoes one of Fiske’s most pointed criticisms of Tivador — that he is a political neophyte who can’t split his time between the City Council chamber and superintendent’s office.

“He’s not been anywhere. He’s not done anything. He’s never come to a meeting. No one knows him,” Fiske told The Daily’s editorial board Friday. “He’s a totally blank slate, and he may be a wonderful person — I’m sure he’s a wonderful person — but you can’t do this job part-time.”

Tivador has maintained it is common for superintendents to have outside commitments, including positions in local government.

“If you want something done, you know who you ask?” Tivador told The Daily’s editorial board Sunday. “The busiest person you know. Because that’s the person that’s going to get it done.”

Tivador shrugged off Fiske’s last-minute revival of the offensive while handing out campaign flyers on campus Monday.

“I just hope she’s able to manage her time,” Tivador said. “I know I can balance mine.”

Fiske’s campaign reminded reporters Monday that she has been endorsed by the Evanston Sentinel, the city’s monthly newspaper. The endorsement was published earlier this month.

One bold-faced name that has stayed out of the 1st Ward race is Rep. Jan Schakowsky, who has endorsed candidates for alderman in the contested 5th and 6th wards. Alex Armour, Schakowsky’s political director, said the North Shore Democrat decided to stay neutral in the Fiske-Tivador match-up.

When polls close 7 p.m. Tuesday, Tivador will rally supporters at World of Beer in downtown Evanston.

As of Monday afternoon, Fiske had not firmed up Election Night plans but said she would be “all over the 1st Ward” during the day.

Check out our election guide at https://dailynorthwestern.com/2013/04/08/city/election-guide-2013-whos-running-and-what-are-the-issues/