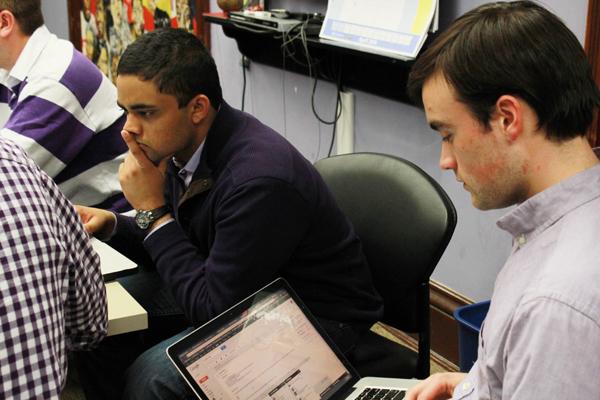 The Weinberg junior and McCormick junior have served on ASG since their freshman year, most recently as speaker of the Senate and student life vice president, respectively. The team uses the slogan “linking perspectives” and kicked off its campaign at The Black House late Sunday night.

“We have experience bringing people in groups together from across communities,” Ajith said. “Alex and I have existing relationships with groups and leaders across campus.”

Ajith cited his own experience planning Deering Days as a time he united multiple student groups to achieve a common goal. He said he suggested the barbeque and entertainment on Deering Meadow for incoming students that became a joint initiative among ASG, Interfraternity Council, Residential College Board and Residence Hall Association with additional support from Mayfest, Northwestern Homecoming, Northwestern Class Alliance, Northwestern Alumni Association and the Office of Orientation and Parent Programs (now called the Office of New Student and Family Programs).

“Rarely all of these groups have worked together on this scale,” Ajith said. “It was beneficial for all of us to work together.”

Both Ajith and Van Atta believe they can change negative student perceptions of ASG across campus by providing tangible services to students. Ajith recalled a time he did this as a senator when a friend requested to open the doors to Deering Library and extend the building’s hours. He was able to make the idea  a reality with his friend’s help. Van Atta said he was most proud of his recent initiative to bring exam relief programming to the Norris University Center during finals week. Van Atta was influential in keeping the building open for 24 hours and bringing therapy dogs to campus, something multiple groups have failed to do in past years, he said.

“There was not a single frown in the room,” said Van Atta about the event. “What we do in ASG can really impact people.”

Van Atta and Ajith both have addressed residential living conditions during their time on ASG, a concern Ajith said is paramount to the student campus experience. He explained that they have been involved in a variety of improvements in dorms, ranging from overhead lighting to better trash disposal. Van Atta has focused on many issues related to mental health and said if elected he would use his position to help remove the stigma of using mental health resources. They are currently polling students on their Facebook page to learn what issues are most important to them.

Both candidates stressed that ASG is an organization that can always improve, particularly in being more transparent with the student body. Ajith said his experience working with student groups to attain funding, one of the most essential roles of the organization, revealed some of its most fundamental flaws.

“We should be a partner and an ally, and not an obstacle,” he said. “Improving that takes a keen understanding of how (the) system works right now.”

Ajith and Van Atta have received endorsements from a number of students across campus, which they are publicizing on their website and Facebook page. Ajith explained they came from both leaders and members of diverse student organizations.

Former IFC vice president for recruitment Andrew Brugman got to know Ajith when he was the president of Delta Tau Delta, which colonized in 2012. Brugman said the pair is approachable and experienced.

“Their candidacy is one of the better ones I’ve seen in my four years,” the Weinberg senior said. “They have a great working relationship that instills a lot of confidence in me that they can really take this forward.”