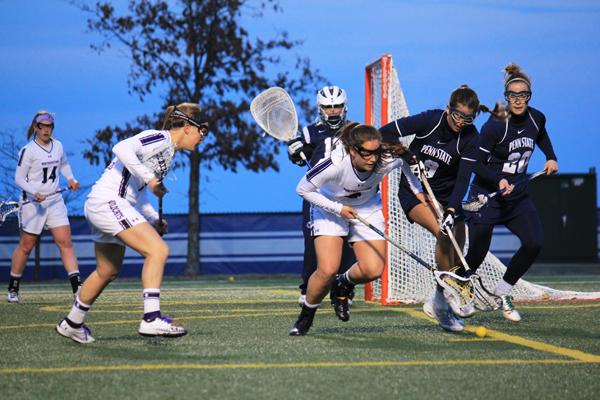 Junior Alyssa Leonard goes for a ground ball against Penn State. Leonard and the Wildcats rallied Sunday to defeat Virginia 11-6.

For the second straight season, No. 4 Northwestern showed No. 11 Virginia that it’s not how you start but rather how you finish games that matters.

The Cavaliers started strong against the Cats, reminiscent of the two teams’ matchup a year ago. Last season, NU trailed Virginia 4-2 at halftime before winning 13-6. On Sunday, the Cats fell behind 4-1 in the early stages of the first half before closing the gap to 4-3 going into the break.

In the second half, NU embarked on an 8-1 run that put the game out of reach for Virginia. After sophomore goalkeeper Bridget Bianco kept the Cats within one goal with a big save with less than one minute left in the first half, NU ran out of the gate with a quick goal from senior attacker Erin Fitzgerald, her first of the game.

The Cavaliers retook the lead after a yellow card on senior midfielder Gabriella Flibotte, but the Cats scored the next 7 goals to take a 9-5 lead.

“The girls just stayed calm,” coach Kelly Amonte Hiller said. “We’ve been down this (road) this year. It was just important for them to stay calm. We started off a bit slow but once we got our feet under us, we did a pretty good job. The second half was obviously a lot better.”

Fitzgerald scored twice during the onslaught, first outrunning her defender to give NU its first lead at 6-5, and then once again on an unassisted tally for the Cats’ ninth goal.

Virginia didn’t give up after NU’s strong attack, scoring once again with less than four minutes left to bring the score to 9-6. However, the Cats would respond with the game’s next 2 goals to leave Klockner Stadium with a comfortable win.

Even with all the offensive theatrics in the second half, NU’s defense arguably brought more to the table. After a shaky start to the game, the Cats held the Cavaliers to 6 goals, only two of which came in the decisive second half. The outing marked the second straight strong performance from the defense, which only allowed 3 goals Friday night.

“We definitely dug ourselves a hole in the beginning, but that’s nothing we weren’t used to,” senior midfielder Taylor Thornton said. “Ground balls and draw controls are everything. At halftime we looked at each other and said that’s what’s going to win this game. So we just kind of got gritty and came up with them.”