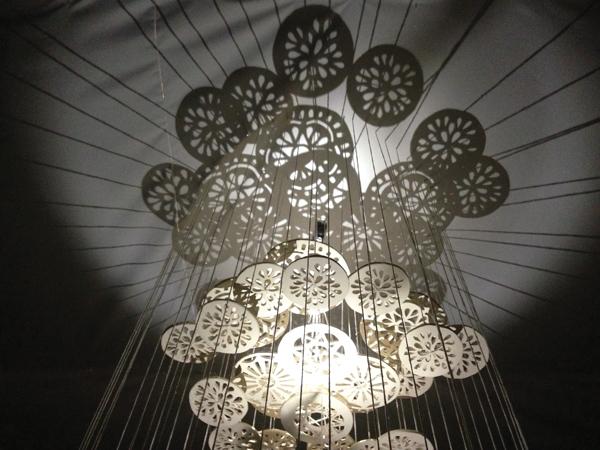 The local student is bringing different communities together through her first showing at the Noyes Cultural Arts Center. Novak’s installation “Art House” explores the concept of homes and began Friday, with a reception held Saturday.

“My intention is to bridge parts of the Evanston community,” Novak said. “I wanted to create some idea of a home for the community.”

Novak said her inspiration for the “home” installation at the center came from Chicago-based artist Theaster Gates. In Gates’ Dorchester Projects, he converted an abandoned two-story property into a library, kitchen and other spaces.

Novak said she initially hoped to display the installations in a vacant home, but liability issues forced her to explore other options.

“Art House” covers a three-room studio with installations made of fabric, light, wood and other materials. For her senior studies class at ETHS, Novak said she worked with Maggie Weiss, one of the center’s resident artists, who taught her fabric treatment and surface design, both of which she uses in her installations. Novak said Weiss later helped her showcase her artwork at the center.

“I have a passion for getting art out to people who wouldn’t normally see art,” Novak said. “I’m intrigued by domesticity and how home feels for someone.”

Jeff Cory, director of the center, said he has worked with ETHS students through concerts and poetry slams, but Novak’s show differs from past collaborations.

“Having a student do a one-person show at Noyes is a unique situation,” Cory said. “It’s interesting to see an artist like Rosa to create in addition to the work we have.”

Although the center usually schedules exhibits well in advance, Cory said after one of the studio spaces became empty at the last minute, he offered the space to Novak. Because she could not find a vacant home for her project, she went with the studio space, she said.

“The vacant studio is more of a home-like space,” Novak said. “I’m really, really happy (the installation) got there.”

The current studio reflects a community issue Novak hopes to address with her project, she said. Expansion of the Piven Theatre Workshop, located within the center, threatens several tenants to move out of their studios.

“People stayed for hours at a time drinking tea (in one of the installations), and it really kept the idea of sitting at home,” she said. “I was hoping people would get that feeling.”

Novak said reactions during the first few days of the exhibit were generally positive.

“People were communicating with other people you wouldn’t normally have without this space,” she said. “It’s almost just a place to ‘be.’”

“The creative process permeates within her,” Baumgartner said. “It doesn’t just stop when the bell rings.”

Novak said she hopes people will feel at home in the installation for the duration of the show.

“I hope people continue to feel that way,” she said. “I hope it reminds them of other homes.”

The installation runs until April 28 and is available 2-6 p.m. Mondays, Wednesdays and Fridays and 10 a.m.-2 p.m. Saturdays.