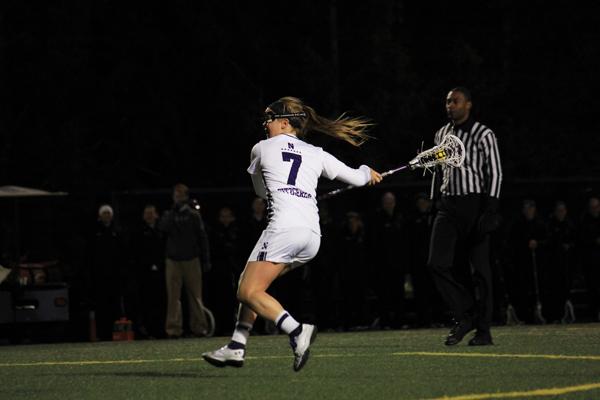 Northwestern attacker Erin Fitzgerald scored four goals in the Wildcats' win over Penn State. The senior now has a team-leading 36 goals this season.

No. 8 Penn State may have knocked No. 3 Florida off its perch, but the Nittany Lions could not touch the Wildcats’ now 87-2 all-time record at Lakeside Field.

In addition to their unrelenting offense, the Cats played the strongest defense they have all season.

Although Penn State’s Mackenzie Cyr scored the Nittany Lions’ first goal just under two minutes after senior attack Erin Fitzgerald put NU on the board in the game’s first minute, the visiting team’s goals were few and far between after that.

Penn State had a 26-minute scoring drought after its first goal and a 17-minute drought between the second and third.

Early in the game, sophomore goalkeeper Bridget Bianco set the tone for her defense when she stepped out from behind the cage to intercept a Penn State pass and subsequently win NU possession. Bianco had four saves for the game.

In line with Bianco’s aggressiveness, the Cats’ defensive players double-teamed nearly all of the Nittany Lions’ ball carriers who came within reach of their 12-meter arch with efficiency and kept up with the quick Penn State players to guard crease rolls with seeming ease.

That aggressive defensive pressure extended to NU’s midfield players. The Cats started the game strong with Fitzgerald’s quick goal and was able to match Penn State’s aggressiveness after that.

“I think we were able to get out there and put some pressure on them, take them out of their offense and just really shake them up a little bit, make them play a little faster,” coach Kelly Amonte Hiller said. “It seemed to work in terms of keeping their score totals down. We were able to at times give our defense a little bit of a rest and take advantage of our own offensive opportunities, which is really important.”

The Cats’ focus was also apparent as they matched the Nittany Lions’ intensity, or, as Amonte Hiller called it, “scrappiness.”

NU kept speedy midfielder Tatum Coffey, who did much of the ball carrying for Penn State, to a single goal and all but eliminated the Nittany Lions’ leading goal scorer Maggie McCormick from play – McCormick took only two shots throughout the evening and notched an assist.

The Cats won the majority of the draws – they took 10 compared to Penn State’s 6 – and just edged the Nittany Lions on ground balls with 15-13, both of which allowed NU to dominate possession.

Fitzgerald, who led the team with four goals on the evening, said her team’s tough offense was the result of a bit of an offensive reevaluation after the Syracuse game, in which the Cats faced a three-goal deficit at one point.

Fitzgerald said NU wanted to take on Penn State in a much more calculated fashion than they did Syracuse.

“We really just moved the ball and worked together,” Fitzgerald said. “We didn’t try to force anything and we were just chipping away, so I think it was just staying calm and letting the shots fall. We didn’t try to do too much.”

In addition to Fitzgerald’s contributions on NU’s offensive end, junior draw control specialist Alyssa Leonard – who won five draw controls – contributed two goals and was consistently one of the team’s most aggressive defenders in the midfield.

Senior midfielder Taylor Thornton also scored twice, the last of which she tallied with less than two minutes left in the game. Junior midfielder Kate Macdonald, who grabbed four ground balls throughout the night, scored just 25 seconds after that.

“We didn’t want to let up at all,” Fitzgerald said. “We weren’t trying to jam it down their throats. We were just going to keep playing our game and stay focused for the full game – and then afterwards we can take a little rest until Sunday.”